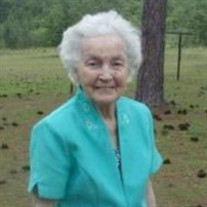 This obituary is posted as a courtesy to the local family and friends. Wilma Louise Wallace Chapman, age 90, entered into rest on Wednesday, January 20, 2021 at her home with her family by her side. Funeral services will be 11:00 AM Saturday, January 30, 2021 from the Chapel of Miller-Rivers-Caulder Funeral Home by Pastor James Redfearn, Rev. Doug Reava, and Rev. Dennis Wallace with burial to follow in the Pleasant Hill Baptist Church Cemetery. The family will greet friends from 10:00 AM – 11:00 AM Saturday, prior to the service at the funeral home and other times at the home of Jerry and Sherrie Chapman, 330 Chewning Road, Cheraw, SC. Wilma Louise Wallace Chapman, 90, was born Friday, August 1, 1930, in the log home which her paternal grandfather built and where her father was also born. This was outside of Cheraw, South Carolina, in what is presently known as the Pleasant Hill Community. Mrs. Chapman’s siblings were born in this log home as well. Mrs. Chapman’s parents are the late Robert Thornwell Wallace, Sr. and the late Lillie Catherine Matheson Wallace. Mrs. Wilma’s paternal grandparents are the late George Cornwell Wallace and the late Icyanne Henrietta Brown Wallace, and her maternal grandparents are the late John Culpepper Matheson and the late Rosa Mae Tyson Matheson. Growing up on her daddy’s cotton farm during the Great Depression, Miss Wilma said she never went without food or clothing due to her mother’s very talented, resourceful use of everything available to them on the farm. From her teenage years and well into adulthood, she worked at Mack’s Five and Dime Store in Cheraw, SC, and later at Northeastern Technical College as the night time receptionist. Having married her beloved Gerald at the age of fourteen (14) and dropping out of school, she obtained her GED, and with flying colors, when she was in her early forties. Going to the mountains in the fall; being faithful to her Lord and His church in many capacities….nursery/children’s teacher from her teen years until her health no longer allowed, Vacation Bible School, mission trips all over this great county; family gatherings; collecting red birds and lighthouses, these were a few of her favorite things. But most of all, she loved children. Any child. Their race, economic background, intellectual capability did not matter. She loved them all. Most of the children called her Granny Weir (Weir being a variant of Wilma which started with her niece Susan Phillips Howiler and her brother John Robert Phillips calling her Aunt Weir and stuck with her throughout life) One great nephew called her Granny, and his mama asked him why he called her Granny instead of Granny Weir like the other children. He replied, “Don’t you know, Mama, Granny Weir is Granny to all the children in the world.” According to Miss Wilma’s way of thinking the only medications needed in her home were Milk of Magnesia, baby aspirin, Aloe Vera lotion, alcohol, home made French fries, her famous fried chicken and banana pudding, and lots of love. She believed, in the right combinations, these items could cure anything from a broken bone to a broken heart. Can you imagine being a teenaged young man and being given one half of a baby aspirin to help with a migraine because she didn’t want you to overdose? Mrs. Chapman was called and known by many names…Mama, Wilma, Miss Wilma, Mrs. Chapman, Granny, Granny Weir, Aunt Weir, Aunt Wilma, but she was proudest of being called and known as a child of God. In addition to her parents and grandparents listed above, she was predeceased by her husband Gerald Ray Chapman, Sr. who died April 19, 2014, a few days after their 69th wedding anniversary. Her brothers, John Cornwell (J.C.) Wallace (died December 1934); and Robert Thornwell Wallace, Jr. (died December 2013) and his wife Eleanor Elizabeth Boan Wallace (died November 2005); sisters Gladys Viola Wallace (died December 1926) and Lillie Mae Wallace Philllips (died March 1992) and her husband John Herbert Phillips (died May 2002); son-in-law Ralph Wilson Chapman, Sr. (died June 2019); nephew Glenn Eugene Wallace, Sr. (died December 2006); great nephew John Stephen Howiler (died February 1986); and great niece Jennifer Susan Howiler (died February 1986). She is survived by her son Gerald “Jerry” Ray Chapman, Jr., and his wife Sherrie Caulder Chapman of Cheraw, SC; daughters Rebecca Chapman Gainey and her husband Melvin Gainey of Cheraw,SC; and LaJoyce Chapman Chapman of Patrick, SC. Grandchildren – Ralph Wilson Chapman, Jr. and his wife Mary Catherine “Katy” Turner Chapman of Patrick, SC; John Tyson Chapman and his wife Shannon McNally Chapman, of Prosper, TX; Shelley Chapman Morgan and her husband David Lester Morgan of Cheraw; SC and Amy Chapman Alexander and her husband Jon Patrick Alexander of Cheraw, SC Great Grandchildren - Zackary Kyle Chapman of Upland, IN: Ashley Brenn Chapman of Clemson, SC; Delaney Kathryn Chapman and her husband Ronan Aengus May of Cedar Park, TX; Jacob Thomas Chapman and Brody Wallace Chapman of Prosper, TX; Jon Matheson Alexander, Charles Thomas Alexander, Lily Cathryn Alexander and Jackson Caulder Alexander of Cheraw, SC; Ella Louise Morgan and James Elwood Morgan of Cheraw, SC; and all the close and extended members of the Chapman, Matheson, Phillips and Wallace families. She loved each and every one of you. Pallbearers will be great grandsons - Charles Thomas Alexander, Jackson Caulder Alexander, Jon Matheson Alexander, Brody Wallace Chapman, Jacob Thomas Chapman, and Zackary Kyle Chapman. Honorary pallbearers will be great nephews – David Jonathan Howiler, Ashley Frank Phillips, and John Robert “Rhett” Phillips. Miller-Rivers-Caulder Funeral Home (www.mrcfuneralhome.com) of Chesterfield, SC is serving the Chapman family

This obituary is posted as a courtesy to the local family and friends. Wilma Louise Wallace Chapman, age 90, entered into rest on Wednesday, January 20, 2021 at her home with her family by her side. Funeral services will be 11:00 AM Saturday,... View Obituary & Service Information

This obituary is posted as a courtesy to the local family and...