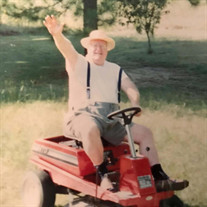 A private family funeral service for Mr. William Edward Fischer, 90, who entered into rest on Thursday, September 10, 2020, will be held at 3 o'clock on Sunday, September 13, 2020, in The Chapel of Brown-Pennington-Atkins Funeral Home. The Rev. Mark Dickinson and Mr. Doug Fischer will conduct the services. Brown-Pennington-Atkins Funeral Home is caring for the family. Memorials may be made in his honor to Habitat For Humanity. Mr. Fischer was born in Baltimore, MD, a son of the late William Fischer and Addie Kelsie Caltrider Fischer. He had been a member of Morton Presbyterian Church and most recently attended McBee Presbyterian Church. He graduated from the University of Maryland with a degree in Engineering. Upon graduating, he enlisted in the United States Air Force and served during the Korean War. Following his deployment, he served in the Active Reserves while pursuing his career as a Civil Engineer. He worked at Andrews Air Force Base, Bolling Air Force Base, and the Pentagon, ending his career in San Francisco as the Deputy Director of Construction & Engineering for the Air Force Bases on the West Coast. Upon his retirement, he moved to Hartsville with his wife, Donna. He worked as a Civil Engineer for Darlington County. Some of his projects were: The Darlington County Jail, Hartsville Library, and the Hartsville Regional Airport. He was a volunteer with Habitat for Humanity for many years. He loved his wife, Donna, and all of the children, grandchildren, and great-grandchildren. He loved Fox News, Big Band, Lawrence Welk, reading scripture, crossword puzzles, target shooting, gun collecting, bowling, and enjoyed fine food. Ed and Donna met at church in Petaluma, CA, in 1982. After dating for two years, they were married on January 1, 1984. Their first date was a church singles outing that ended in having cantaloupe in Donna's back yard. They enjoyed fine dining in San Francisco, Pacino's at the Beach, and areal sightseeing in the San Francisco Bay. One of Donna's favorite date memories was when they were planning on a fancy dinner in the city when Ed locked the keys in the car when they made a stop along the way. So instead of a fine dinner out, they sat under a tree and shared McDonald's. They moved to Hartsville in 1989 after retirement, where they currently reside. He is survived by his wife, Donna Lou Taylor; sons, Douglas Fischer, David Fischer; stepsons, Don Sharp, Russell Taylor, Bill Taylor, John Fischera; daughter, Barbara Millett; step-daughter, Sue Burriss; grandchildren, Tracy, Misti, Adrienne, Teddy, Craig, Melissa, Mathew, Shaina, Scott, Madison, Logan; great-grandchildren, McKenzie, Faryn, Elizabeth, Phoenix, Nora, Bradley, Amelia, Faith, Jacob, and Hailey.

A private family funeral service for Mr. William Edward Fischer, 90, who entered into rest on Thursday, September 10, 2020, will be held at 3 o'clock on Sunday, September 13, 2020, in The Chapel of Brown-Pennington-Atkins Funeral Home. The Rev.... View Obituary & Service Information

The family of Mr. William Edward Fischer created this Life Tributes page to make it easy to share your memories.