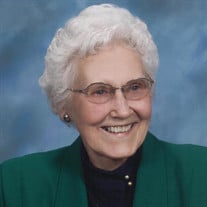 (This obituary is posted by Brown-Pennington-Atkins as a courtesy to Rev. Brad Griese for his Hartsville friends.) Mrs. Violet (Vickie) MacKenzie Griese, 97, passed into glory on Wednesday, March 25, 2020, at the Rolling Green Nursing Facility in Greenville, SC. A private graveside service for family will be held on Saturday, March 28, 2020 at the Woodlawn Memorial Park, 1901 Wade Hampton Blvd, Greenville, SC. Vickie was born on July 22, 1922, in Elizabeth, New Jersey, the youngest of three children born to the late William Henry and Loretta Fay MacKenzie. At the age of seven, Vickie’s family moved to Fredericksburg, VA, where she graduated from Fredericksburg High School in 1939. She then graduated from Strayer Business College in 1940 and took a job at the FBI in Washington, D.C. She married Alvin Griese on February 3, 1950. They were married for 45 years until his passing in 1995. Vickie stayed home and raised five children over 20 years. She then went back to work in retail, then as an administrative assistant and a legal secretary to help with her children’s college tuition. Upon her retirement in 1988, she and Alvin moved to Greenville where Alvin began working as an Architect for Bob Jones University. The greatest occurrence in Vickie and Alvin’s lives occurred in 1965, when they both received the Lord Jesus Christ as their Savior under the ministry of Pastor Ollie Goad at the Immanuel Baptist Church in Annandale, VA. This changed the whole course of the Griese family. Vickie was preceded in death by her parents and husband referred to above; her two brothers, William and Alex MacKenzie; and a granddaughter, Sandra Ahrens. She is survived by her five children: William Griese of Gainesville, FL; Patricia Griese Ahrens (Kevin) of Sebring, FL; James Griese (Ilma) of Spain; Bradley Griese (Karen) of Florence, SC; and Loretta Griese Turner (Scott) of Greer, SC; thirteen grandchildren, William, Jr., Michael and John Griese, Stephen Ahrens, Crystal Ahrens Taylor, Lucas, Jakob and Nicole Griese, Bradley Griese, Jr., Rachel Griese Nelson, Benjamin Griese, Gregory Turner and Lisa Turner Leonard, and twenty-two great grandchildren. Memorials are encouraged to be made in Vickie’s honor to The Gideon’s International, Spartanburg North Camp, 2939 Chesnee Hwy., Spartanburg, SC 29307, 864-578-1771. Condolences to the family may be sent to her daughter, Loretta Turner, at 204 Windward Way, Greer, SC 29650.

(This obituary is posted by Brown-Pennington-Atkins as a courtesy to Rev. Brad Griese for his Hartsville friends.) Mrs. Violet (Vickie) MacKenzie Griese, 97, passed into glory on Wednesday, March 25, 2020, at the Rolling Green Nursing Facility... View Obituary & Service Information

The family of Mrs. Violet "Vickie" Griese created this Life Tributes page to make it easy to share your memories.

(This obituary is posted by Brown-Pennington-Atkins as a courtesy...