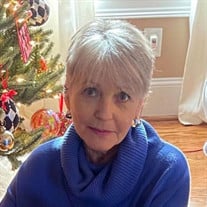 A graveside funeral service for Mrs. Victoria Morrell "Vickie" Tinsely, 67, who entered into rest on Sunday, August 1, 2021, will be held at 11 o'clock on Wednesday, August 4, 2021, at Magnolia Cemetery. The Rev. Ladell Humphries will officiate, and the family will receive friends following the service. Brown-Pennington-Atkins Funeral Directors are caring for the family. Born in Hartsville, SC, she was the daughter of Beth Thomas Morrell and the late W. B. "Buddy" Morrell. Vickie was born in Hartsville, SC on July 10, 1954, to Buddy and Beth Morrell. Later the family moved to Cheraw, SC, where she graduated from Cheraw High School in 1972. Vickie returned some years later to Hartsville, SC, where she began her career in the travel industry. She worked at Carolina Bank Travel for several years specializing in commercial travel. Vickie would then go on to work for Sonoco handling their travel for over 25 years. During this time, she met the man who completed her life, Chip Tinsley. They were married for 26 years. Vickie loved working in her yard planting flowers and growing vegetables. She spent a lot of time in her kitchen cooking and perfecting recipes. Her family always had special requests for the dishes she made for gatherings that she would plan. Family holidays and occasions were important to Vickie, and she made sure everyone knew it by what you put on your plate. She was a devoted wife, daughter, mother, and grandmother, lovingly known as “Hunny”. She is survived by her loving husband, Edward Harris "Chip" Tinsely, Jr. of Hartsville, SC; mother, Beth Thomas Morrell of Hartsville, SC; daughter, Jennifer (Greg) Glanz of Hartsville, SC; stepsons, Edward H. Tinsley, III of Cheraw, SC, Tim Tinsley of Charlotte, NC; brother, Kyle (Laurie) Morrell of Cheraw, SC; nephews, Kaleb (Langlee) Morrell of Rock Hill, SC, Jacob (Leah) Morrell of Cheraw, SC; great-niece, Cely Grace Morrell of Rock Hill, SC; grandchild, Kinsey Sanders of Hartsville, SC; step-grandchildren, Layla Tinsley of Cheraw, SC, Madelyn Tinsley of Cheraw, SC, Caroline Tinsley of Cheraw, SC.

A graveside funeral service for Mrs. Victoria Morrell "Vickie" Tinsely, 67, who entered into rest on Sunday, August 1, 2021, will be held at 11 o'clock on Wednesday, August 4, 2021, at Magnolia Cemetery. The Rev. Ladell Humphries will officiate,... View Obituary & Service Information

The family of Mrs. Victoria Morrell Tinsley created this Life Tributes page to make it easy to share your memories.