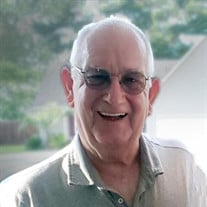 Thomas Curtis Smith Sr., age 75, of Bishopville, SC, took his last breath of earthly air and entered into eternal rest on Wednesday, March 16, 2022. Tom, as most people called him, was a friend to many and loved deeply. His family enjoyed his jokes and the laughter that came with them. His jokes, at times, caused eye rolls before the laughter but always ended with his baby talk at the end. Tom was an avid reader of the bible and studied it often. His love for God spilled over to all things, including God's creatures. Tom would catch a fly and let it out before he would swat it. He would feed the opossum that would wander into his country yard as well as bring stray dogs home from the dump. Tom was a hard worker and worked up until a few months before his passing. Tom was dedicated to his family and always thought about them before himself. His stubbornness made him a force to be reckoned with, and he passed this on to his children and grandchildren alike, leaving his mark on the world for years to come. Tom was born on May 26, 1946, to Eunice B. Morris of Fayetteville, NC, and his father, the late Hallie Smith of Murrells Inlet, S.C. Tom was preceded in death by his Dad, Robert Morris. Brothers, Albert Randall, Sonny Smith, and Steve Smith. Sisters, Nancy Milliken, Salena Carol Randall, Carolyn Flower Stempa, and Brenda Dillard, and a granddaughter, Meagan Janel Hickman. Surviving to carry on his memory is his wife of 27 years, Teresa Kay Lee Smith. His Mom, Eunice B. Morris, Children, Lynn Smith (Glynn)of Hartsville, S.C., Tommy Smith Jr. (Tammy) of McBee, S.C., Alice Burkhalter. Galivants Ferry, S.C., Sherry House (Todd} of Clayton, N.C., Ashley Smith of Florence, S.C., and Robbie Smith (Mandy} of Murrells Inlet, S.C. Tom is also survived by 12 grandchildren. Tabetha Brown (Vern). Miken Rios (Mikael}, Alyssa Beaman (Caleb}, John Michael Hickman II, Brittney McKay (Cory), Grayson McKay (Jordan), Izzy Smith, Christian House, Christopher House, Michael Thomas Burkhalter, River Smith, and Lilah Smith. 8 Great-grandchildren- Jayla, Lilliauna. Kayla, Eli, Jordan, Alijah, Kamryn, and a stubborn one due to arrive soon, Ezekiel. Tom is also survived by a brother, Ken Smith, and 2 sisters, Sandra Dillard Stevens and Linda Wesner. His best friend Larry Gilbert is also left to cherish his memories. The family will receive friends on Sunday, March 20, from 5 pm to 7 pm at Brown-Pennington-Atkins Funeral Home, 306 West Home Avenue, Hartsville, SC 29550. A Graveside service will be held Monday, March 21st at 2 pm at Westview Memorial Park Cemetery 2223 Kelley Town Road Hartsville, S.C 29550. In lieu of flowers, the family respectfully suggests that memorials may be made in his honor to Darlington County Humane Society.

Thomas Curtis Smith Sr., age 75, of Bishopville, SC, took his last breath of earthly air and entered into eternal rest on Wednesday, March 16, 2022. Tom, as most people called him, was a friend to many and loved deeply. His family enjoyed... View Obituary & Service Information

The family of Mr. Thomas Curtis Smith Sr. created this Life Tributes page to make it easy to share your memories.