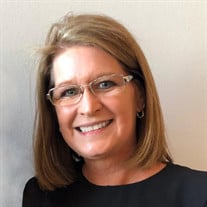 A celebration of the life of Mrs. Teressa Griggs Gardner, 58, who entered into rest on Thursday, June 24, 2021, will be held at 3 o'clock on Monday, June 28, 2021, in The Chapel of Brown-Pennington-Atkins Funeral Home. The Rev. Tim Skipper will officiate with burial to follow in Bethany-Tiller Cemetery. The family will receive friends following the service. In lieu of flowers, memorials may be made in her honor to Bethany Cemetery, c/o Mrs. Tammy Couick, 3353 Timrod Road, Bethune, SC 29009. Brown-Pennington-Atkins Funeral Directors are caring for the family. Mrs. Teressa Griggs Gardner, the wife of Robert Edward “Eddie” Gardner, was born on November 8th, 1962 in Hartsville, SC. She was the daughter of Margaret Atkinson Griggs and the late David Earl Griggs. She was a 1981 graduate of Thomas Hart Academy and continued her education by earning her associate’s degree from Florence-Darlington Technical College. She served as the office manager for Dr. T. James Bell for 16 years and most recently retired from Fifth Street Cleaners. Teressa was a beloved wife, mother, and most recently a grandmother. Affectionately known as “Momma T”. Her greatest joy was found in precious moments spent with her family. Although she was short in stature, she was mighty in her protective, nurturing spirit. She was a constant caring presence to those who were blessed by her love. On Sundays in the fall, she could be found in her favorite recliner, cheering on her second love, the Green Bay Packers. In addition to her spouse, left to cherish her memory are her daughters Ashley (Steven) McDermott of Holly Springs, NC, Anna (Blakeland) Harrison of Myrtle Beach, SC; mother, Margaret (Donald) Griggs of Hartsville, SC; brother, David (Jan) Griggs of Seneca, SC; grandchild, Hampton Harrison; nieces Jennifer (Johnny) Woods, Katie Reaves, Meredith Reaves, Heather(Robert) Blackwell, Jessica Griggs; nephews, Brad (Regina) Griggs and Josh (Marie) Griggs; and many great-nieces and nephews.

A celebration of the life of Mrs. Teressa Griggs Gardner, 58, who entered into rest on Thursday, June 24, 2021, will be held at 3 o'clock on Monday, June 28, 2021, in The Chapel of Brown-Pennington-Atkins Funeral Home. The Rev. Tim Skipper will... View Obituary & Service Information

The family of Mrs. Teressa Griggs Gardner created this Life Tributes page to make it easy to share your memories.

A celebration of the life of Mrs. Teressa Griggs Gardner, 58,...