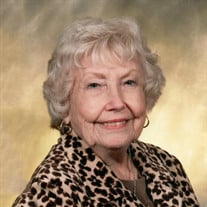 Mrs. Sara Kelley Wildeboer, of the Village at Summerville, Summerville, SC, and the Kelleytown Community in Hartsville, SC, passed away on June 13, 2020. She was the only child of the late Simelton E. Kelley and Mabel Haile Kelley. Born on April 15, 1924, Sara, even as a young child, was reported to have been high spirited, energetic, and fiercely independent. Tales were told of her young years growing up on a working farm and cherished by devoted parents. During World War II, she moved to New Jersey and assisted in the war effort in the meaningful job of helping to build Navy fighter planes and time spent on the staff of the Washington Post Newspaper. After the war, Sara married John Wildeboer of Parsippany NJ and returned to Hartsville SC. Although she initially worked in the business with her father and husband, feeling unfulfilled, she returned to college and pursued graduate studies becoming one of the first middle school guidance counselors. She acted in this position, while raising two daughters, until retirement and was vastly appreciated and recognized as she helped students and parents with life choices throughout her career. Sara enjoyed spending time with friends and family, traveling, reading, music, and shopping. She was strong in her faith, support for just causes, children, animals, and her commitment to her ancestral Jacob Kelley House in Hartsville, SC. Sara is survived by her two daughters, Sherry Wildeboer Macaluso (Charles) of Blythewood, SC, and Joan Wildeboer Sorrow of Hartsville, SC. She adored her grandchildren, Lanie Boyd Tiller (Phillip) of Hartsville, SC, and Charles Macaluso, Jr. of Blythewood, SC; her great-grandchildren, Boyd Tiller, and Cooper Tiller of Hartsville, SC. She treasured her many close friends keeping them close throughout her life. In addition to her parents, she was preceded in death by her husband, John Wildeboer, and her grandson, Simon Boyd. The family wishes to thank her loving caregiver, Jackie Kramartz, and the outstanding, compassionate care provided by the Agape Hospice House of Summerville, SC. A private graveside service will be held with care provided by Brown-Pennington-Atkins Funeral Home. The family has asked that masks be worn to protect those in the family who are at higher risk. In lieu of flowers, donations may be made to the Darlington County Humane Society and the World Central Kitchen.

Mrs. Sara Kelley Wildeboer, of the Village at Summerville, Summerville, SC, and the Kelleytown Community in Hartsville, SC, passed away on June 13, 2020. She was the only child of the late Simelton E. Kelley and Mabel Haile Kelley. Born on... View Obituary & Service Information

The family of Mrs. Sara Kelley Wildeboer created this Life Tributes page to make it easy to share your memories.