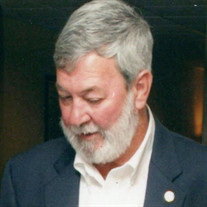 Samuel “Sammy” Johnson passed away on Sunday, April 24, 2022, at the age of 74 in his hometown, Hartsville, SC. He was the youngest son of the late Knoxie Johnson and Lillie Rivers Johnson. His battle with medical issues in recent years showed his ongoing courage never complaining and despite the pain, he stayed strong until the end. He is survived by his wife, Sara Francis Johnson; daughters Robin Duke and Jennifer “Christy” Kuemmel; brother, Donald Johnson, two sisters, Betty Putzey and Joyce Gibson; three grandchildren, Matt Allen, Wit Cannon, and Brooks Cannon; four great-grandchildren, Mallori and Maxton Allen, Kate Cannon and Brooke Cannon. In 1967, shortly after graduating high school, he was drafted into the Vietnam War where he dutifully served our country until 1969. During those two years, he earned a variety of badges and medals of Honor and we his family and friends honor his dedication to his country and family. Sammy loved to cook, watch NASCAR (which I knew not to call on Sundays after 12pm). The races eventually gave way to the old Western movies. I believe he loved watching shows about the Wild West as it reminded him of the time when he was young, wild and free to be. I can tell you that he was also a modern outlaw to technology! He wouldn’t own a computer or a mobile phone. Although he did have an answering machine...it never even answered! Speaking of not answering...you didn’t call between 12:30 and 1:30 pm when “The Young and Restless” was on! Sammy was a friend who would bend over backwards for those he cared about and would give you the shirt off his back and/or all the food in his house. He surrounded himself with friends and family, where he felt most comfortable and loved. He was quite the storyteller and loved to make people laugh. He was a big contributor and active in the community. He was a Master Mason, Shriner, and Santa Clause, to name a few. Over the years, he put together and gave away hundreds of fruit baskets during the holidays. He grilled tirelessly on his smoker throughout the year to give to friends, family, and anyone in need. While we all wish he could be here with us today, we are honored to celebrate his life and the memories we have shared with him. We will miss him dearly. A funeral service with Military Honors to honor his life will be held at 3 o'clock on Wednesday, April 27, 2022, in The Chapel of Brown-Pennington-Atkins Funeral Home, with The Rev. Dennis Outlaw officiating. The family will receive friends one hour prior to the service, and burial will follow in Hebron United Methodist Church Cemetery, McBee, SC. The Directors of Brown-Pennington-Atkins Funeral Home & Crematory are caring for the family.

Samuel &#8220;Sammy&#8221; Johnson passed away on Sunday, April 24, 2022, at the age of 74 in his hometown, Hartsville, SC. He was the youngest son of the late Knoxie Johnson and Lillie Rivers Johnson. His battle with medical issues in recent... View Obituary & Service Information

The family of Mr. Samuel Monroe "Sammy" Johnson created this Life Tributes page to make it easy to share your memories.