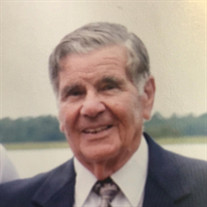 Graveside funeral services for Mr. Robert Carl Spagnola, 94, who entered into rest on Tuesday, January 28, 2020, will be held at 11 o'clock on Saturday, February 1, 2020, at Bethlehem United Methodist Church Cemetery. The Rev. Fran Connell will officiate and the family will receive friends immediately following the service. Hancock-Elmore-Hill Funeral Home is caring for the family. Born in Forest Park, IL. On September 22, 1925, to Phillip and Camille Spagnola. Robert served in the US Navy during World War II as a Petty Officer Third Class from 1943 to 1946. Then Robert worked for the Seagram Distillers located in Florida, and from there to South Carolina as the State Manager. In 1976 after retiring from Seagrams he was the founder and owner of Casual Living Inc. which was the first casual and outdoor furniture store located in Columbia SC. He was known for his passion for playing tennis and boating, which included multiple trips along the eastern coast. Robert and his wife lived half of the year in Lexington, SC and the other half in Vero Beach, FL for 26 years. Robert will be deeply missed by his family and friends that cherished his happy and joyful personality. Surviving is his wife of 71 years, Marilyn Prouty Spagnola; one grandson, Andrew D. Woodham III, and his wife Christine Watts Woodham; one great-grandson, Rivers Andrew Woodham all of Columbia, SC. A son in law, Andrew D. Woodham Jr. of West Columbia, SC. He was predeceased by his two daughters; Diane Spagnola Woodham, and Denise Renee Spagnola, and his son, Robert Phillip Spagnola.

The family of Mr. Robert Carl Spagnola created this Life Tributes page to make it easy to share your memories.