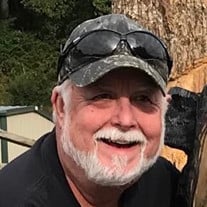 Funeral services for Mr. Robert Earl Jacques, 63, who entered into rest on Friday, January 8, 2021, will be private. Brown-Pennington-Atkins Funeral Directors are caring for the family. Robert "Bobby" was born on February 18, 1957, in West Palm Beach, Florida, he is the son of the late Robert Earl Jacques, Sr and the late Ramona Inkell Jacques. He grew up in West Palm Beach and upon graduating high school traveled to Ohio where he obtained his degree from Ohio Institute of Technology in electrical engineering. He returned to South Florida where he spent 28 years working for Racal-Milgo (telecommunications and computer networks). Early during his time with Racal-Milgo, he met his best friend and the love of his life, his wife, Donise. Robert and Donise were blessed with two beautiful children - his daughter Aimee Lynn (Jacques) Varnum and his son Brandon Daniel Jacques. They raised their children in south Florida before moving to Hartsville, South Carolina in 2009. There, he worked as a quality control manager for A.O. Smith. Bobby had many hobbies including cooking, woodworking, painting, stained glass and there was never a yard or garage sale sign he could pass by (his wife made many, many u-turns!). He also loved fishing, being outdoors, his many camping trips with family and close friends, and spending time at the family cabin in the mountains of North Carolina. Anyone who had the privilege of having him in their life would tell you he was an incredible man that brought love, joy, and laughter into their life. He spent his life entertaining those around him with his many facial expressions, practical jokes, and an occasional “break-out” dance to whatever music was playing. He lived, loved, and danced his way through life which we will all hold close to our hearts. He was an adoring, affectionate, loyal and devoted husband to his wife, Donise as well as an amazing father to his children, Aimee and Brandon. Bobby had so much love in his heart that he was also the most incredible “stand-in” father for his niece, Jordan. He left us way too soon but all of us who loved him know he is already with “Papa” Buzz who welcomed him with open arms, a few choice words, and cold beer at Rosie’s. He leaves behind his loving wife of 37 years, Donise Jacques of Hartsville, SC, his daughter, son-in-law and grandchildren, Aimee and Kyle Varnum, Bailee Varnum and Wyatt Varnum of Lithia, FL, his son Brandon Jacques of West Palm Beach, FL, his sister Linda Segasser of Live Oak, FL, his sister Teresa Mosher and children, Rodney, Duane and Christina of West Columbia, TX, his mother-in-law Dolores McAndrew, late father-in-law Gerald (Papa Buzz) McAndrew of West Palm Beach, FL, his sister-in-law and niece, Kimberly Lear and Jordan Potter of West Palm Beach, FL, his brother-in-law and family, Paul and Carissa Lear, their daughters, Kylie, Mia and Zoe, their sons, Christian and Jacob of Ft Lauderdale, FL, his brother-in-law and family, Ted and Nancy Adriance, their daughter Eve and son John of Greensboro, NC, his sister-in-law and family, Debbie and Steve Jones of Jacksonville, FL, their daughters Kellie and Ashley, his sister-in-law and family, Linda and Lance Henrion of Boynton Beach, FL, their daughter Alexa and their son Shane, his sister-in-law and family, Karen and Steve Zabow of Atlanta, GA, their daughters Morgan and Carly, his sister-in-law and family Susan and Doug Roberson of Royal Palm Beach, FL, their sons Troy, Ryan and Brady. He also leaves behind many friends and extended family members. In lieu of flowers or donations, the family requests anyone who wishes to post a tribute or comment for the family on who "Robert/Bobby/Bob" or "UB" "Uncle Bobby" was to you.

Funeral services for Mr. Robert Earl Jacques, 63, who entered into rest on Friday, January 8, 2021, will be private. Brown-Pennington-Atkins Funeral Directors are caring for the family. Robert "Bobby" was born on February 18, 1957, in West... View Obituary & Service Information

The family of Mr. Robert Earl Jacques created this Life Tributes page to make it easy to share your memories.