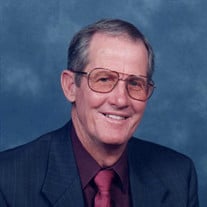 Mr. Robert Joyce “Bobby” Griggs, 84, of McBee, SC, died peacefully at home on Sunday, February 21, 2021. A graveside service will be held at 2 o’clock on Wednesday, February 24, 2021, at Union United Methodist Church Cemetery in McBee, SC. The Reverends Kathy Carr and Paige Wheeler will officiate, and Brown-Pennington-Atkins Funeral Directors are caring for the family. The family will receive friends following the service. Bobby was born in Chesterfield County, SC, a son of the late Thomas “Buff” Griggs and Annie Sue Griggs on March 9, 1936. He attended Cheraw public schools and started farming full-time in his teenage years to help support his mother and siblings after the tragic loss of his father. Later in life, Bobby worked as a supervisor at the Kendall Plant in Bethune, SC, where he worked for 33 years. From there, he went to work for Darlington County Water & Sewer Authority in Darlington, SC, where he worked for many years until he retired at the age of 82. Bobby was a member of Union United Methodist Church of McBee, SC. He was an avid farmer and continued farming throughout his entire life. He took pride in cultivating the land and harvesting the crops he produced. He was a hard worker and always “on the go” but never complained. He rarely sat down to rest, except to spend time with his family when they visited. Bobby loved his family dearly and had an extreme tenderness for all of his grandchildren and great-grandchildren. His love and compassion for his family’s well-being will be greatly missed. Bobby is survived by his wife of 52 years, Judy Griggs; two sons, Robert (Audrey) Griggs of Hartsville, SC, and David Griggs of North, SC; three daughters, Pam (Gil) Smith of McBee, SC, Mechelle Cobb of Camden, SC, and Sharon (Richard) Stacks of Lancaster, SC; ten grandchildren, Clayton (Jennifer) Griggs, Preston (Jennifer) Griggs, Damien (Hannah) McElveen, Taylor (Brooke) Smith, Jarrett Smith, Morgan (Gunner) Mathis, Taylor Stacks, Bailey Stacks, Cassie Bailey, Jake Griggs; four great-grandchildren, Blazlea Donahue, Cooper Griggs, Kammi McElveen, and Weston McElveen; two sisters, Gwendolyn Dickerson of Wolcottville, IN and Betty Sue (Phillip) Staley of Millers Creek, NC; and a special family friend, Ray McKenzie of McBee, SC. In addition to his parents, Bobby was preceded in death by his brothers, Tom Griggs of Marion, SC, and Ronnie Griggs of Cheraw, SC. In lieu of flowers, the family respectfully requests any memorials be made to Alligator Fire District, P.O. Box 622, Hartsville, SC 29551.

The family of Mr. Robert Joyce "Bobby" Griggs created this Life Tributes page to make it easy to share your memories.