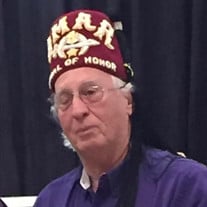 Mr. Robert “Bobby” McDonald Stokes, age 75, of Bishopville, SC, passed away Tuesday, December 1, 2020 due to complications from Covid-19. Born on July 31, 1945 in Florence, SC, he was the son of the late Thomas Edward Stokes, Sr. and the late Katherine Pate Stokes. Bobby was an active member of Bethlehem United Methodist Church, where he opened the doors every Sunday morning and made coffee for the Men’s Club. Bobby also served 24 years as the superintendent of the Bethlehem Methodist Cemetery, spending countless hours keeping up the grounds and battling pesky fire ants. It is said, though, that Bobby knew everyone who was ever buried there. He thoroughly enjoyed his weekday ritual of “Hardee’s biscuits” with his buddies, then visiting other friends around town, many times over a Coca-Cola. His love for his friends was only surpassed by his love for his family. He was the “greatest” uncle to Tom and Greer. As children, he taught them to ride bikes, took them to jump off the old sawdust pile, searched for arrowheads at the farm, rode in the combine, and taught them how to pick seeds out of cotton. As adults, he showed them how to be patient, kind-hearted, and selfless people. Bobby adored his great-nieces and great-nephews, Sarah Grace, Peyton, Miller, and Wells, and wore out the highway attending their confirmations, birthdays, games, competitions, and graduations. Bobby had a profound love of service and fraternity, especially those found in the Bodies of the Masonic Lodge, where he served as Past Master of Bishopville Masonic Lodge #104 and Past Master of Lucknow Masonic Lodge #212. He was a member of Saint David's Lodge #72, Hartsville Masonic Lodge #173, Honorary Life Member of Patesville Masonic Lodge #295, and an Honorary Member of McBee Masonic Lodge #313. He was a member of the Omar Shrine, Past Director, and the sitting Treasurer of the Darlington County Red Fez Shrine Club, and The Jolly Jeepsters. He was a 54-year member of the Bishopville Masonic Lodge and the Red Fez Shrine Club. He faithfully supported the Shriner's Hospital for Children and was a member of the $100 Million Club. He attended the Shrine Bowl each year and was a recipient of the Medal of Honor Fez. Bobby was a member of the Columbia Consistory of the SC Scottish Rite, where he received his 32nd Degree as a Master Mason. He was affiliated with the Orient of the East (1801) in Charleston, SC. Bobby was a recipient of the Young Farmer of the Year Award. He was loved by many, looked after others, and did a lot of good for others without expecting anything in return. Bobby will be missed by all who knew and loved him. He is survived by his sister-in-law, Nancy Williams Stokes of Columbia, SC; nephew, Thomas Edward Stokes, III, and his wife April Denny Stokes of Charleston, SC; niece, Greer Stokes McDougald, and husband, Jesse Fretwell McDougald of Anderson, SC; great-nieces, Sarah Grace McDougald, Peyton Elise Stokes; great-nephews, Miller Thomas Stokes, Jesse Fretwell "Wells" McDougald, Jr. In addition to his parents, he was preceded in death by his brother, Thomas Edward Stokes, Jr. Graveside funeral services with Masonic Rites will be held at 1 o'clock on Saturday, December 5, 2020, in the Bethlehem United Methodist Church Cemetery, with the Rev. Frances Connell officiating. Friends may visit Hancock-Elmore-Hill Funeral Home on Friday afternoon to pay their respects and sign the register. Hancock-Elmore-Hill Funeral Directors are caring for the family. Due to Covid-19 protocols, masks are mandatory and social distancing is encouraged. Serving as pallbearers will be Mike Pate, Tim Pate, Andy Pate, Pearce O’Kelley, Wells McDougald, and Miller Stokes. In lieu of flowers, memorials may be made in his honor to the Shriner's Hospital for Children, 950 W. Faris Road, Greenville, SC 29605.

The family of Mr. Robert "Bobby" McDonald Stokes created this Life Tributes page to make it easy to share your memories.