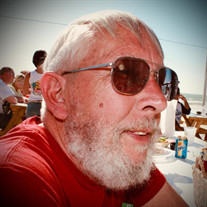 Robert "Bob or Bobby" Stephen Latimer, III passed away at home in St. Helena Island, SC, on Wednesday, December 15, 2021, at the age of 77 (Although he claimed to be only 39.) Bobby, the first son of Robert S. Latimer Jr. and Mary "June" Yarborough Latimer, was born in Statesboro, Georgia, on July 14, 1944, but lived most of his early life in Bishopville, where his parents owned and operated the Lee County Messenger. Tales of him and his siblings Johnny, Kathryn, and Lian were often shared in his Daddy's columns. He ran track at Bishopville High School and later at Presbyterian College. He was also a lifeguard and was very proud of his time spent lifeguarding at Lee County State Park. He graduated from Clemson University in 1966 with a Ceramics Engineering degree. He remained a loyal Tiger fan his entire life, including pointing out what a "Tiger Paw" was to his grandchildren from their infancy. After moving to Mississippi for a job in ceramics manufacturing, he was introduced to the oil industry and changed his focus traveling the south as a mixing expert for Mississippi Mud, GEO Oil rising to Vice President of Kramer Oil. After the oil industry changed, he moved home to Bishopville, working at Reeves Brothers Textile Plant and later as an Environmental Engineer at the South Carolina Department of Health and Environmental Control. Upon his return home, he met and fell in love with his wife of 30 years, Beth Varner Latimer dancing to Country Music. They moved to Camden and eventually St. Helena's Island together, where they enjoyed the area "sea life" and island lifestyle, including crabbing, clamming, fishing, and boating. He loved fishing the Lynches River and hunting out at "Uncles," telling stories of his buck kills and once shooting three boars with one shot. An excellent hunter, he consistently provided game to his family until the very end. He was an incredible pool player who often joked after beating someone, "you want me to play right-handed now." Bob loved growing black-eyed peas, butter beans, corn, and prized tomatoes that he and brother Johnny always competed on. He continued gardening in St. Helena Island, adding orange trees stating he always wanted to grow his own oranges. He is survived by his loving wife, Beth Varner Latimer; his children, Robert Stephen Latimer, IV (Samantha Latimer) from New Port Richey, Fl, Robin Latimer Hammond (John Hammond) from Tampa, Fl, Andrew Bates Latimer (Sunny Latimer) from St. Petersburg, Fl; and Daughter-in-law, Micheal Anne Latimer from St. Petersburg, Fl; His three siblings from Bishopville, John Yarborough Latimer (Patricia Latimer), Kathryn Latimer Welch (Hank Welch), and Lian Latimer; and his ten grandchildren Stephanie Katie Woosley, Chelsea Latimer, Meagan Latimer, Mackenzie Latimer, Miranda Latimer, Madeleine Latimer, Carolina Summer Latimer, Caylee Latimer, Allysun Latimer, and Lilly "George" Latimer and two great-grandchildren Sophia Jean and Kason "Opie" Stephen. He is preceded in death by his parents, Robert Stephen Latimer, Jr, and Mary "June" Yarborough Latimer, and his son, Marc A. Latimer. A graveside funeral service will be held at 11 o’clock on Wednesday, December 22, 2021, in the Bishopville Presbyterian Church Cemetery, the church where he grew up was a lifelong member. The Rev. Chris Parnell will officiate and Hancock-Elmore-Hill Funeral directors are caring for the family. The family will receive friends following the service. In lieu of flowers, please contribute to the Friends of Lee County Animal Shelter by phone (803) 483-7387, through their PayPal account: [email protected], or by check: P.O. Box 309, Bishopville SC 29010. Directions: Bishopville Presbyterian Church, 215 South Main Street, Bishopville, SC 29010.

Robert "Bob or Bobby" Stephen Latimer, III passed away at home in St. Helena Island, SC, on Wednesday, December 15, 2021, at the age of 77 (Although he claimed to be only 39.) Bobby, the first son of Robert S. Latimer Jr. and Mary "June" Yarborough... View Obituary & Service Information

The family of Mr. Robert "Bob" Stephen Latimer III created this Life Tributes page to make it easy to share your memories.