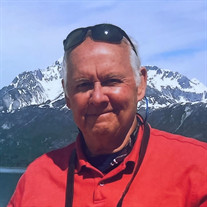 A memorial service for Mr. Robert Theodore "Bob" Engwall, 68, who entered into rest peacefully on Friday, September 24, 2021, will be held at 1 o'clock on Friday, October 1, 2021, in The Chapel of Brown-Pennington-Atkins Funeral Home, with Father Dan Papineau officiating. The family will receive friends at a reception on the front lawn of First Presbyterian Church immediately following the service. Brown-Pennington-Atkins Funeral Directors are caring for the family. In lieu of flowers, memorials may be made in his honor to The Heart Foundation, 31822 Village Center Road, Suite 208, Westlake Village, CA 91361, or online at www.theheartfoundation.org Bob was born on June 13, 1953, in New Britain, Connecticut. He was the son of the late Leanor "Carlin" Engwall and Theodore G. Engwall. He was a graduate of Pulaski Senior High School in New Britain, CT, Class of 1971, and he graduated from Central Connecticut State University with his Bachelor of Science in 1975. Bob had a long prosperous career in Software development and IT. After working for several years for the state of Connecticut, he enrolled in an immersive course in computer software. Bob was then hired by Policy Management Systems Corporation, based in Columbia, SC, in 1981, where he became part of the original team that created and led PMSC's expansion into international territory, focused on northern and southern Europe. Additional work included IT development with Duck Creek and Mindtree, as well as private consulting. Bob’s talents were many: an accomplished golfer, photographer, a beloved father, and a friend who loved to entertain. He enjoyed traveling the world with work, family, and friends and making many wonderful memories along the way. He also enjoyed taking trips to the beach and golf trips with his best friends and was an active member of St. Mary the Virgin Mother Roman Catholic Church and the Hartsville Country Club. He is survived by his loving daughter, Ansley Engwall of Columbia, SC; sister, Debbie Kowalski of New Britain, CT; fiancée, Kyle Anne Barnett of Hartsville, SC.

A memorial service for Mr. Robert Theodore "Bob" Engwall, 68, who entered into rest peacefully on Friday, September 24, 2021, will be held at 1 o'clock on Friday, October 1, 2021, in The Chapel of Brown-Pennington-Atkins Funeral Home, with Father... View Obituary & Service Information

The family of Mr. Robert “Bob” Theodore Engwall created this Life Tributes page to make it easy to share your memories.