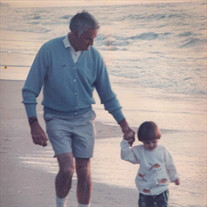 Mass of Christian Burial for Mr. Richard James Mansfield, 90, who entered into rest on Wednesday, September 9, 2020, will be held at 11 o'clock on Wednesday, September 16, 2020, at St. Mary the Virgin Mother Roman Catholic Church. Father Dan Papineau will officiate and the family will receive friends following the service. Brown-Pennington-Atkins Funeral Directors are caring for the family. Richard Mansfield was the son of the late Godfrey and Helen Mansfield of Eatontown, New Jersey. He was an A&P manager for many years. He is survived by his wife of 63 years, Dorothy Mansfield; son Richard J. and wife Lisa and their two daughters Erica and Alexandra of Wall Township, NJ; son, Thomas, and wife Allyson and daughter Victoria of Kennebunkport, ME; daughter Elizabeth and her husband Anthony Ercolino and their two children Nina and Anthony of Ocean Township, NJ; daughter, Mary Ellen and husband Dale Johnson and their two sons and daughter in law Greyson, Seth and Kelsey of Hartsville, SC. He was a skilled baseball player and had his name recorded in the Baseball Hall of Fame for pitching a no-hitter against the semi-pro team, The Acerras Brothers. He served four years in the Air Force during the Korean War. He was an avid reader, music lover, and enjoyed fishing. He took his role as a grandfather very seriously. He gave his all to his grandchildren, making sure they lived an idyllic childhood. He was an incredible man and his efforts paved the way for his family. He will be forever missed and loved in our hearts. “Till next time pal, a faint heart never won the fair maiden. We love you, Granpa.”

The family of Mr. Richard James Mansfield created this Life Tributes page to make it easy to share your memories.