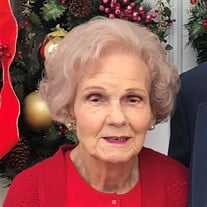 Mrs. Retha McIntosh Chapman, 91, passed away peacefully on December 31, 2020, surrounded by her husband of almost 74 years. She was born in the old McLeod Hospital in Florence, South Carolina on January 16, 1929. She was the youngest child of Thomas Wyley McIntosh and Gertrude Rogers McIntosh. She grew up on a farm in the Antioch section of Hartsville which had been in the family for generations. She knew the hardships of the Great Depression. As a young teenager, she helped her mother manage the farm during World War II while her older brother was in the service. She graduated from Antioch High School in 1945 where she was the valedictorian of her class. She married the salutatorian, her childhood sweetheart Raymond, on July 24, 1947. She was employed by Coker’s Department Store and later worked at her family’s business, Quality Hardware. In addition to being a full-time mom, Retha enjoyed traveling, cross-stitch, and monthly bridge games and supper with five other couples which lasted for decades. These six couples were affectionately called “The Dirty Dozen.” Retha was a lifelong member of First Baptist Church in Hartsville, where she volunteered for Vacation Bible School and played the piano in the Primary Department for many years. She is survived by her husband, Raymond Melvin Chapman, and their two children, Cynthia Chapman Harrell (William) and Dr. Raymond McIntosh Chapman (Pam). She is also survived by her grandchildren: Russell Rogers Harrell (Nikki), Lora Harrell Knotts (Blake), Meredith Hart Chapman, John McIntosh Chapman, Thomas Charles Chapman, and Andrew Benson Chapman; great-grandchildren: Cayley Harrell, Lorelai Knotts, and Emmett Knotts; in addition to many nieces and nephews whom she greatly loved. She was preceded in death by her brother, John Charles McIntosh (“Brother”), and sisters, Lula Martha Easterling (“Sister”) and Lyndal McIntosh Goodson. A private burial is planned at Magnolia Cemetery with a memorial service scheduled in the future. Memorials may be made to First Baptist Church, 104 East Home Avenue, Hartsville, SC 29550, the Hartsville Heritage Foundation, PO Box 212, Hartsville, SC 29551 or the Hartsville Museum, PO Box 431 Hartsville, SC 29551. Brown-Pennington-Atkins Funeral Directors are caring for the family.

Mrs. Retha McIntosh Chapman, 91, passed away peacefully on December 31, 2020, surrounded by her husband of almost 74 years. She was born in the old McLeod Hospital in Florence, South Carolina on January 16, 1929. She was the youngest child of... View Obituary & Service Information

The family of Mrs. Retha McIntosh Chapman created this Life Tributes page to make it easy to share your memories.