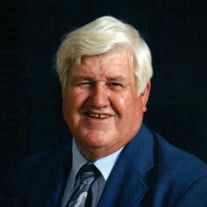 A funeral service for Mr. Philip H. Byrd, 81, who entered into rest on Wednesday, July 28, 2021, will be held at 11 o'clock on Friday, July 30, 2021, in Bethlehem United Methodist Church. The Rev. Cindy Rumsey and The Rev. Dan Sullivan will officiate with burial to follow in the church cemetery. The family will receive friends from 5:00 until 7:00 PM on Thursday at Brown-Pennington-Atkins Funeral Home. Memorials may be made in his honor to Bethlehem United Methodist Church, 2240 Bethlehem Road, Hartsville, SC 29550. Mr. Byrd, the widower of Wanda Delores Perry Byrd, was born in Hartsville, SC. He was the son of the late Sydney Juanita Hursey Byrd and the late Bruce Weldon Byrd. He was a graduate of Anderson College and transferred to Clemson University. He was the owner and operator of Byrd's Hardware & Fireplace Shop. Phillip loved serving his community, he loved to farm, and he loved to work at his store. Most of all he loved his family, his church, and Clemson football. He was an active member of Bethlehem United Methodist Church. He is survived by his son, Stephen Byrd of Hartsville, SC; daughter, Stephanie (Rusty) Howle of Hartsville, SC; sister, Janet Thigpen of Hanahan, SC, Sydney (Bobby) Jones of Lake Junaluska, NC; grandchildren, Kevin L. (Taylor) Byrd, P. Chase Nesbitt, Ciara Kendall, Ethan R. Byrd, Phillip M. Byrd, Sophie A. Byrd, Britney Howle, Katie (Anthony) McPherson; great-grandchildren, Raylee B. Byrd, Karson Byrd, Wyatt McPherson, Rowan McPherson. In addition to his wife and his parents, he was preceded in death by his brother, Bruce Byrd. The family would like to thank McLeod Hospice for the loving care given to their father, especially from his special nurse, Cheryl Wilhelm.

A funeral service for Mr. Philip H. Byrd, 81, who entered into rest on Wednesday, July 28, 2021, will be held at 11 o'clock on Friday, July 30, 2021, in Bethlehem United Methodist Church. The Rev. Cindy Rumsey and The Rev. Dan Sullivan will... View Obituary & Service Information

The family of Mr. Philip Howard Byrd created this Life Tributes page to make it easy to share your memories.