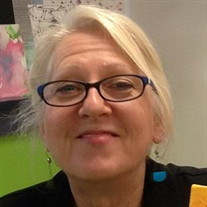 It is with deep sorrow that Mr. Michael R. "Mike" Fowle announces the death of his beloved wife, Patricia A. "Patz" Fowle, 66. A funeral service to celebrate her life will be held at 2 o'clock on Wednesday, November 10, 2021, at Florence National Cemetery, 1001 Stockade Drive, Florence, SC 29506. Brown-Pennington-Atkins Funeral Directors are caring for the family. Patz passed away peacefully on Thursday, October 14, 2021, at her residence. Born in Ringgold, GA, she was the daughter of the late Homer and Lula Mae Quinn Walters. In her early years, she was educated in public schools in Detroit, Michigan where teachers encouraged her creative abilities. Although her family would experience difficult times she always had her love of art as a positive strength growing up. In 1970, while Patz (Her nickname) attended a rural high school, she realized a genuine passion for working in clay and intuitively figured out a straightforward technique for making quirky, clay animals. As Patz continued to develop her hand-building skills she shared her unique process with others in the classroom. As a young adult, she began her career working in the field of graphic arts. After marrying, she and her husband, Mike started on a life-long journey and began their family. Patz was educated received her education at The Parsons School of Design at Adelphi University, NY (Focus of study: Illustration), The Savannah College of Art and Design (Focus of studies: Drawing, Metal Fabrication/Jewelry, Illustration, Animation, Scientific Illustration, Character Design, and Ceramics.) In the Summer of 2008 and 2009, Patz studied at the Teacher Institute in Contemporary Art at the School of the Art Institute of Chicago, and also at The Kansas City Art Institute / Educators ArtLab summer program in Kansas City, Missouri. (Focus of study: Metal Sculpture & Fabrication) (Focus: Oil Painting). She also studied under Master Potter, Yosuke Haruta. In 2013, Patz served as the Visual Arts Coordinator at the South Carolina Governor's School for Science & Mathematics in Hartsville, SC. Patz Fowle & Mike Fowle designed an innovative, on-campus "Open Art Studio" accessible to all high school students attending the SC Governor's School for Science & Mathematics. In 2019, Patz was named Fine Arts Instructor and Visual Arts Coordinator at the South Carolina Governor's School for Science & Mathematics. On May 22, 2021, the South Carolina Governor's School for Science & Math and the GSSM Board of Directors officially named the on-campus art studio in honor of GSSM's Visual Arts Founder, and Fine Arts Instructor Patz Fowle: The Patz Fowle Visual Arts Studio. While sharing an awesome life together, Patz and Mike enjoy collaborating with others in their journeys through art. She is survived by her loving husband, Michael Ray Fowle of Hartsville, SC; daughter, Michelle Rae Morris of Hartsville, SC.

It is with deep sorrow that Mr. Michael R. "Mike" Fowle announces the death of his beloved wife, Patricia A. "Patz" Fowle, 66. A funeral service to celebrate her life will be held at 2 o'clock on Wednesday, November 10, 2021, at Florence National... View Obituary & Service Information

The family of Mrs. Patricia A. "Patz" Fowle created this Life Tributes page to make it easy to share your memories.

It is with deep sorrow that Mr. Michael R. &quot;Mike&quot; Fowle announces...