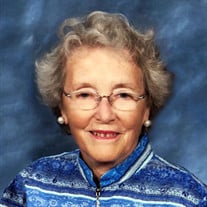 A memorial service to honor the life of Olive Hinnant Timberlake, 100, who died peacefully on May 8, 2022, will be held at 11:30 a.m. on Friday, May 13, 2002, in First Presbyterian Church, Hartsville, SC. The Rev. Ashley Cheek and The Rev. Jeri Perkins will officiate, and the family will receive friends in the Narthex of the church, and a light lunch will be served following the service. A family graveside service will be held at Magnolia Cemetery prior to the service. The Directors of Brown-Pennington-Atkins Funeral Home & Crematory are caring for the family. In lieu of flowers, donations may be made to First Presbyterian Church, 213 W. Home Avenue, Hartsville, SC 29550, or a charity of one's choice. Olive Hinnant Timberlake was born on March 27, 1922, in Ridgeway, SC, the daughter of the late Alice Odom Hinnant and the late Carl Ravencroft Hinnant. She was a graduate of Ridgeway High School and Winthrop College. After college, Olive moved to Hartsville, where she taught Math and Spanish for three years at Hartsville High School. During that time, she met her husband, William "Bill" Marshall Timberlake whom she was married for over 71 years. Olive spent her life graciously doing for others. She was a member of First Presbyterian Church, where she served as a Sunday School Teacher, Deacon, and Elder, as well as on numerous other committees. She was a dedicated volunteer for Byerly and Carolina Pines Hospital Auxiliaries, instrumental in opening Hartsville Food Bank, which became part of Hartsville Interfaith Ministries, 1986 Chamber of Commerce Citizen of the Year, and a Girl Scout Leader and Council member for over 50 years. She participated in many Mexico mission trips, volunteered for Habitat for Humanity, Operation Mobilization Ships, and was a member of the Thursday Study Club and the Hartsville Garden Club. Olive was the recipient of the State of South Carolina Order of the Palmetto in 2010 and the Marion Medallion in 2013. Olive is survived by her daughter, Mary Alice King (Julian); son, Crawford Goodman Timberlake III; daughter, Patricia Montgomery (Deke); granddaughters, Elizabeth Marshall King, Anna Lee Timberlake; grandsons, Merritt Goodman King, William Jenkins Montgomery, Lawton Timberlake Montgomery; great-granddaughters, Savannah McKenzie, and Madelyn Lee Fields. In addition to her parents, she is preceded in death by her husband, William "Bill" Marshall Timberlake; brothers, Wallace Powell Hinnant, Harris Odom Hinnant, Carl Ravencroft Hinnant Jr.; and her grandson, Crawford Goodman Timberlake IV.

The family of Mrs. Olive Hinnant Timberlake created this Life Tributes page to make it easy to share your memories.

A memorial service to honor the life of Olive Hinnant Timberlake,...