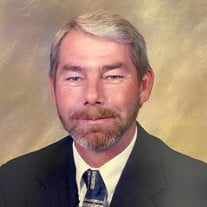 A private family graveside service for Mr. Olin David Morrison, 59, who entered into rest on Tuesday, September 29, 2020, will be held in McBee Cemetery. The Rev. Paige Wheeler and The Rev. Charlie Short will officiate. Brown-Pennington-Atkins Funeral Directors are caring for the family. Guests are invited to pay their respects and sign the register on Wednesday, September 30, 2020, at Brown-Pennington-Atkins Funeral Home. In lieu of flowers, memorials may be made in his honor to McLeod Hospice or Union United Methodist Church. David was born in Hartsville, SC, on January 13, 1961, and was a member of Union United Methodist Church. A graduate of McBee High School, he attended Francis Marion University before beginning his career with Clemson University’s Pee Dee Research Station in Florence, SC. He retired after 28 years of service as a Tobacco Research Specialist. In 1993 Clemson University honored David with the Outstanding Service Award in recognition of his work with the Extension Tobacco Program. He was a dedicated employee known throughout the Pee Dee region for his role in the station’s summer tobacco tours for farmers and agricultural industry representatives. He was a mentor and supervisor for the many young people who were employed as summer interns at the station during his years of service. After retirement, he continued his lifetime passion for agriculture, growing hay and raising cattle and horses on the family farm. In his early years, he enjoyed the excitement of auto racing both as a driver and as a spectator. He had fond memories of the friendships he developed during that time in his life. Later in life, he enjoyed listening to music, watching television westerns, and spending time on the farm. Surviving relatives include his parents Olin and Kathryn Morrison; sisters, Frances (Dale) McCluney, and Mary Ann (Rod) Ellison; brother, Ralph (Loren Brumbaugh) Morrison and nieces Tara (Richard) Harris and Alexandra McCluney. He was predeceased by paternal grandparents Daniel A. and Marie Stokes Morrison and maternal grandparents Carl and Marguerite Melton Jones. The family would like to thank the staff of McLeod Hospice in Cheraw and Florence as well as the private caretakers who so ably and efficiently provided comfort and care during his recent illness.

A private family graveside service for Mr. Olin David Morrison, 59, who entered into rest on Tuesday, September 29, 2020, will be held in McBee Cemetery. The Rev. Paige Wheeler and The Rev. Charlie Short will officiate. Brown-Pennington-Atkins... View Obituary & Service Information

The family of Mr. Olin David Morrison created this Life Tributes page to make it easy to share your memories.