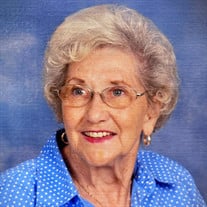 Funeral services for Miriam Jordan Griggs, age 83, will be held at 4:00 pm on Tuesday, August 31, 2021, at Bethlehem United Methodist Church. The Rev. Cynthia Rumsey and the Rev. Dan Sullivan will officiate. Visitation for friends and family will be held at Brown-Pennington-Atkins Funeral Home in Hartsville, SC on Monday, August 30, 2021, from 5:00 pm until 7:00 pm. Mrs. Griggs went to be with her Lord and Savior Jesus Christ to whom she loved so dearly on Saturday, August 28, 2021. She was born on November 9, 1937, to her loving parents Melvin V. Jordan and Frances B. Jordan, and grew up in the Leavensworth Community. Later in life, she met and married her beloved husband, Richard Griggs, and together, they operated Griggs Grocery and later, Miriam’s Kitchen. While operating Griggs Grocery, they were able to see parts of the world such as Spain, England, Costa Rico, Hawaii, and other places she dreamt of as a young girl from Leavensworth and never believed she would see. She is a member of Bethlehem United Methodist Church and the Ladies Bible Class. She enjoyed operating Griggs Grocery and especially, Miriam’s Kitchen, serving hot biscuits to all that came to enjoy her cooking. She also received her high school diploma in May of 1989, showing that it is never too late to continue your education. Surviving are her daughter, Teresa G. Hendrix (William) of Hartsville, SC; sons, Richard J. Griggs II (Darlene) of Columbia, SC, Marvin Todd Griggs (Jacki) of Pennsylvania; sister, Carolyn Winburn of Hartsville, SC; brother, Colin Jordan (Martha) of Port Wentworth, GA; grandchildren, Jeff Hendrix (Joan), Beth Ramer (Wes), Zachary Griggs (Kristin), Savana Griggs, Makena Griggs; great-grandkids, Madison Hendrix, Riley Hendrix, Bailee Ramer, Charlee Ramer, Hayden Griggs, and Holland Griggs. She was preceded in death by her husband, Richard Jesse Griggs; son, Scott Jordan Griggs; brother-in-law, J.E. Winburn; and a very dear friend, Charlie (Blue) Griggs. A very special thank you to Ms. Sharon Haynes, Ms. Dorothy Mae Joyner, Ms. Frances Soon, and Ms. JoAnn Edwards for all the love and care they have shown our dear Mother. Also, special thanks to Theresa Knotts, who has worked side by side with our Mama for many years and for always seeing that she had plenty of good food from Miriam’s Kitchen! Also, we would like to extend our sincere gratitude to all the nurses and doctors at McLeod Regional Medical Center and McLeod Hospice House who cared for her. Memorials may be made to Bethlehem United Methodist Church, 2236 Bethlehem Rd., Hartsville, SC 29550.

Funeral services for Miriam Jordan Griggs, age 83, will be held at 4:00 pm on Tuesday, August 31, 2021, at Bethlehem United Methodist Church. The Rev. Cynthia Rumsey and the Rev. Dan Sullivan will officiate. Visitation for friends and family... View Obituary & Service Information

The family of Mrs. Miriam Jordan Griggs created this Life Tributes page to make it easy to share your memories.

Funeral services for Miriam Jordan Griggs, age 83, will be held...