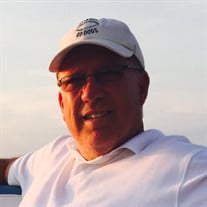 Michael Eugene (Mike) Culbreath, 59, of Hartsville, suddenly and tragically departed his earthly home on Wednesday, February 17, 2021. Mike was born on May 16, 1961, in Myrtle Beach, South Carolina to William Richard (Bill) Culbreath and Helen Louise (Lawrimore) Culbreath. At just over 11 pounds, he was one of the largest babies born in Horry County Hospital up until that time. A lifelong South Carolina resident, Mike started school at Ridgeland Elementary School, attended Laurens Elementary for one year, and then continued school in Newberry, from the 5th grade through his high school graduation in 1979. Never one to focus on academics alone, he was an outstanding athlete, stellar tennis player, and a loyal, outgoing friend to all. While living in Newberry, he developed his closest and most enduring friendships, mostly with his traveling softball teams, appropriately named the Outlaws and Bad Company. Mike originally decided to forego college upon graduating from high school and began work at Central Soya in Newberry. After a year of working in the poultry business and unloading boxcars full of fertilizer, he decided college might be the correct path after all. He attended the University of South Carolina and Spartanburg Methodist College before settling in at Newberry College, where he graduated in 1985. A Physical Education major, he excelled at intramurals and having a really good time throughout his college years. It was in 1985 he also met the love of his life and the lady he was destined to spend his life cherishing. Catherine (Kathi) Barefoot was the first person able to tame his wild side (a little) and tolerate his antics (a lot) and they fell hopelessly in love. They were wed on December 8, 1990, and never once left each other’s sides. In January of 1995, they welcomed a son, Michael Levi Culbreath, into the world. Levi was the apple of his mother’s eye and his father made over. Mike worked for the SC Department of Transportation, John de la Howe Orphanage (where his mother was raised), and the Abbeville County School System. He culminated his many years working for the state of South Carolina with his retirement in 2014. But, as one given to a life of hard work and not sitting around on his rear end, he immediately started work at Walmart in Greenwood and later transferred to Walmart in Florence when he and Kathi relocated to Hartsville in late 2020. Mike would tell you his best years were spent working with youth, mostly in the Abbeville School System. He coached youth sports, particularly football, and eventually coached sports at both the middle and high school levels. He drove the bus for all the team sports and developed wonderful relationships with Abbeville’s youth that would be the envy of any educator. He was extremely proud of his Abbeville girls’ tennis teams and loved his Abbeville Panther football teams with an unbridled passion. He never missed a sporting event if possible and the kids would look for him every time. He loved each and every one of them and he cared about, and kept up with them, long after they graduated. They, in turn, shared that love for him. Mike loved all animals, particularly his puppies, golf, music of every type, Nebraska Cornhusker football, and all Newberry Indian (he’d never call them Wolves) athletics. He loved good food and good times. But mostly, he just loved life. He loved his Lord, his Kathi, his Levi, his family, and his friends. He lived every day to the fullest and had no regrets. A man not focused on worldly things or status, he was rich in the wonderful relationships he had with everyone he knew. He always had a smile or a story and absolutely knew no strangers. His huge, genuine laugh was beyond infectious. Mike was raised in the church and belonged to a church his entire life. But, in true Mike fashion, he didn’t just go to church; he worked with youth and other groups and truly lived a Christian life. No one who knew him doubted his faith or steadfast moral compass. To those around him, he truly epitomized the role model for all things good. His passion for life and doing good, and fun, things was an example for all. The void he leaves in all our hearts will never be filled. Mike is survived by his loving wife, Kathi Culbreath, of the home; his son Levi Culbreath of Hartsville; his mother Louise Culbreath of Mt. Pleasant: his brother Will Culbreath (Teresa) of Mt Pleasant, nephews Trey and Andy Culbreath, niece Julianna Culbreath, sister in law Deanna Kay Brooks, mother in law Kay McCormick (Don) and Emily Brown and her family of Hartsville. He is preceded in death by his father, Bill. A small, private service will be held to celebrate Mike’s life on Monday, February 22nd at Brown-Pennington-Atkins Funeral Home in Hartsville. His lifelong friend, the Rev Paul Rowe of Newberry, SC will officiate the service. A larger, and much more informal, service to celebrate his amazing life will be held at the conclusion of the pandemic, most likely in his hometown of Newberry. In lieu of flowers, the family respectfully requests any memorials be made to the Darlington County Humane Society, 1705 Adoption Way, Darlington, SC 29532.

The family of Mr. Michael Eugene Culbreath created this Life Tributes page to make it easy to share your memories.