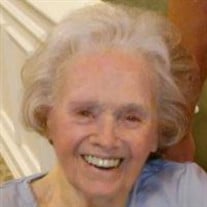 Margaret Lunn Reaves, 94, died August 12, 2020, in the compassionate care of McLeod Hospice at The Manor of Florence, where she had resided for the past six years. Private graveside funeral services will be held at Bethlehem United Methodist Church Cemetery, Bishopville, SC. Brown-Pennington-Atkins Funeral Home is caring for the family. Margaret was born in Florence on December 12, 1925, to parents John Edward Lunn and Elise Hamer Lunn Perritt. Mrs. Reaves was preceded in death by her parents; her husband, Billy McCoy Reaves; their infant son, Richard Reaves; one brother, John (Jack) Edward Lunn, Jr.; two sisters, Mary Agnes (Maggie) Lunn Foss, and Meadors Lunn Stricklin. Margaret Reaves is survived by two sons, Michael M. Reaves of Chapin, SC, and Gregory L. Reaves of Hartsville and grandson, Michael Justin Reaves of Hartsville, two sisters-in-law, nieces, and nephews, all of whom she adored. Margaret was a charter member of St. Luke United Methodist Church where she sang in the choir for many years, was an active member of Mary Anne McCulloch Circle, and used her artistic gift to illustrate the appropriately titled, “Break Bread with Glad and Generous Hearts”, St. Luke’s locally coveted cookbook. Mrs. Reaves attended Limestone College and continued studies at the University of South Carolina, attaining her bachelor’s degree (1947). Because of her continued desire to learn, she furthered her academic achievements earning her master’s degree at Winthrop University (1979). Mrs. Reaves realized her professional calling in the classroom as a highly regarded math teacher who, because of her passion for teaching, was loved by her students in Darlington County School System, where her career led to the position of Math Coordinator. Margaret and Bill Reaves were married on June 10, 1950. Over the years, all who visited their home knew Margaret would greet them with a welcoming smile and be treated to her wonderful laughter, which warmed their home and the hearts of friends and family. Mrs. Reaves was an exceptional gardener, artist, and avid bridge enthusiast. Margaret truly savored time spent playing with her bridge family while taking time to teach novices to play as well. She cherished spending time with her family along South Carolina’s coast and on perennial trips to Clemson each fall. The Reaves family has deep appreciation and sentiment for the friends who accompanied their parents on Clemson trips while making and enriching treasured memories. Margaret Reaves’ family would like to thank The Manor of Florence for their unwavering attention and affection through their excellent care for Margaret. In lieu of flowers, the family respectfully requests donations be made to St. Luke United Methodist Church, 302 Dunlap Drive, Hartsville SC 29550 or Darlington County Humane Society, Post Office Box 1655, Hartsville SC 29550.

Margaret Lunn Reaves, 94, died August 12, 2020, in the compassionate care of McLeod Hospice at The Manor of Florence, where she had resided for the past six years. Private graveside funeral services will be held at Bethlehem United Methodist... View Obituary & Service Information

The family of Mrs. Margaret Lunn Reaves created this Life Tributes page to make it easy to share your memories.