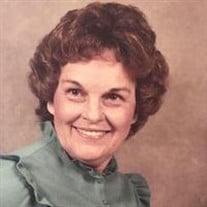 Louise Wilson Sturdivant entered peacefully into eternal rest on Monday, November 1, 2021, at the age of 99. She was born on September 16, 1922, to the late Greenwood and Estelle Carter Wilson. She was preceded in death by her husband, John Edward Sturdivant, Jr., and a sister, Frances Dutton. A graveside service will be held on Thursday, November 4 at 1:00 pm at Mount Hope Cemetery in Florence. Chaplain Edward Strickland of Agape Hospice will officiate the celebration of her life. The family will receive friends after the service. Waters-Powell Funeral home is assisting the family. She was a member of The First Baptist Church of Florence in her younger years and in later years, the Gospel Temple. She was employed by Timer Products for many years and later worked for the Florence March of Dimes. At age 63, she began her most rewarding “career” as a volunteer at Carolinas Hospital System for 30 years. She was a joy to all she met: fellow volunteers, nurses, doctors, patients, other employees, and visitors. Her most precious gift was blessing others by sharing her lifelong love for God with others in every way she could. For her tireless devotion of volunteering for more than 17,000 hours, she was awarded numerous Volunteer of the Year awards and also received the prestigious Lifetime Achievement Award from the President of the United States. This was not a surprise to others, but she was humbled by this recognition. She was a loving mother and grandmother. She served the Lord quietly and faithfully through her many acts of kindness. Survivors include her son, Johnny Sturdivant (Sharon) of Hartsville; daughter, Sandra Rada, Memphis, TN; four grandchildren, Allison (Lyle) Lee, Johnny Rada, Bryan (Sarah) Rada, and Julie (Calvin) Leerskov; six great-grandchildren: Zachary and Isabelle Rada, Emma and Zoey Rada, Harrison Lee, Reed and Elle Leerskov. The family would like to thank the staff at Heritage Nursing Home and Agape Hospice for their loving care of her. In lieu of flowers, memorials may be sent to Agape Hospice, 301 Rainbow Drive, Florence, SC 29501. This obituary is posted as a courtesy at the request of the family in Hartsville.

Louise Wilson Sturdivant entered peacefully into eternal rest on Monday, November 1, 2021, at the age of 99. She was born on September 16, 1922, to the late Greenwood and Estelle Carter Wilson. She was preceded in death by her husband, John... View Obituary & Service Information

The family of Mrs. Louise Wilson Sturdivant created this Life Tributes page to make it easy to share your memories.