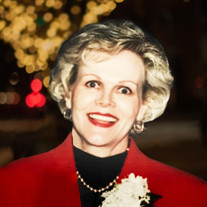 Mrs. Lou A. Shaw "Aggie" passed away peacefully with her family surrounding her on Thursday, Nov 18, 2021. Her husband, Billy Shaw, was holding her hand as she took her last breath on their 60th Wedding Anniversary. A graveside service will be held at 3:00 p.m. on Sunday, November 21, 2021, in Kelleytown Baptist Church Cemetery, Hartsville, SC. The Reverend Gary Anderson will officiate the service, and the family will receive friends immediately following. In lieu of flowers, memorials may be made in her honor to Kelleytown Baptist Church, 2609 Kelleytown Road, Hartsville, SC. Brown-Pennington-Atkins Funeral Directors are caring for the family. Mrs. Shaw was born in Hartsville, SC on August 27, 1942. She was the daughter of the late Henry David and Golda Mildred Cox Anderson. She was a member of Kelleytown Baptist church where she was active with her Ladies’ Mission Circle and faithfully served. She could often be found in the nursery on Wednesday or Sunday nights. She also quietly worked behind the scenes as she and Billy painted the lines on the soccer fields each week in preparation for the Upward Soccer games on Saturdays. She served alongside her daughter-in-law, Lori, as a volunteer at one of the first Good News Clubs in Hartsville. Aggie was known for her beauty and her passion for caring for people. After she graduated from the Mercy School of Nursing in Charlotte NC, she began a long career in Health Care. As a registered nurse she was Head Nurse at Byerly Hospital and Morrell Convalescent Center. She is remembered as a mentor to many and she never stopped learning. She continued her education adding the distinction of Psychiatric-Mental Health Nurse (PMHNs). As a member of the American Psychiatric Nurses Association, she was expanded how she cared for people at Pee Dee Mental Health. After retiring, she returned to work with the SC Department of Corrections where she was able to evaluate and care for inmates. She always had a heart for people suffering from mental health difficulties and was one of the proudest accomplishments of her career. She was proud of her children and grandchildren who knew her as Grandma Bubba. When asked to speak about their grandmother, her grandchildren say she was cute, petite, and never afraid to speak her mind. She was the very definition of a “spitfire”. They want her remembered as the most intelligent woman and best nurse they ever knew. They also say she made the best green bean casserole ever and she will be greatly missed. Surviving are her husband, Billy Shaw of Hartsville, SC; children, Billy “Puddin” Shaw, II (Lori) of Hartsville, SC; Betty “Tootie” Shaw of Philadelphia, PA; grandchildren, Anna Rose Shaw, Madalyn Louise Shaw, Ethan William Shaw all of Hartsville, SC; sister, Pam Anderson Coker of Lake City, SC. In addition to her parents, she was preceded in death by her sisters, Lois Anderson Fields, and Karen Anderson Folk.

Mrs. Lou A. Shaw "Aggie" passed away peacefully with her family surrounding her on Thursday, Nov 18, 2021. Her husband, Billy Shaw, was holding her hand as she took her last breath on their 60th Wedding Anniversary. A graveside service will... View Obituary & Service Information

The family of Mrs. Lou Agnes Shaw created this Life Tributes page to make it easy to share your memories.

Mrs. Lou A. Shaw &quot;Aggie&quot; passed away peacefully with her family...