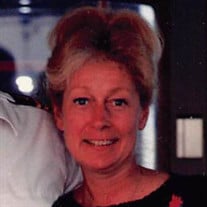 Linda Faulkner (nee Miller) was born in Newark, NJ in May of 1943 and grew up in the neighboring town of Short Hills, NJ. She was the daughter of Howard Miller who headed the structural engineering department at the PSE&G laboratory in New Jersey. (Her great uncle was Robert Chesebrough who invented Vaseline). Her mother, Lillian Miller (nee Hassmiller) was an accomplished pianist who attended the Juilliard School of music on a double scholarship for piano and music composition. Linda had an idyllic childhood; she was popular in school and modeled for the Lord and Taylor department store in Millburn NJ in her Junior and senior years of high school. She spent the summers on the East end of Long Island NY at the family summer home in Cutchogue NY. She often worked at the Wickham's Fruit Farm in Cutchogue with her childhood friend Parnell Wickham. Linda attended Short Hills School, graduating in 1955, and then Millburn High School graduating in 1959. After marrying at a young age, and while raising her two children, Linda obtained a degree in psychology from the University of Kentucky, and then she taught remedial reading at a private academy in Lexington KY. Linda had two children, Stephen and Shannon with her first husband Clyde V. Ethington. Her life revolved firstly around her children and grandchildren and more recently her great children. She met her present husband John Faulkner 45 years ago in March of 1977 in Nassau, Bahamas while on Spring break with her daughter Shannon. They married in August of the same year and Linda moved to Nova Scotia Canada with Stephen and Shannon. After suffering through five snowy years in Nova Scotia, and with the children having left the nest, John and Linda sold their paint and wallpaper business in Nova Scotia and purchased the Long Island New York summer house. John's work took them to the Florida Keys in the Winter and Long Island NY in the summer where Linda enjoyed sailing, as long as the boat stayed within sight of land!!. In 1989 John and Linda moved again, this time to Nicholasville KY. Further moves to Wilmington NC and Dallas NC followed before they finally settled in Hartsville SC. Linda was an avid reader, she enjoyed traveling, and together with John, they traveled to Europe and the Caribbean. In 1996 they crossed Canada from coast to coast by rail. Linda loved all children but particularly her grandchildren and great-grandchildren, she spent as much time with them as possible until her oral cancer struck in 2011. She was a fighter and suffered through several devastating surgeries often living with a lot of pain, but she never complained, and she tried to put on a happy face for any visitors, but time took its toll and on Monday 25th April 2022 after almost 11years of suffering she passed peacefully in her sleep. All those who knew Linda will remember her lovely smile and her kind heart. She touched all who knew her and never had a harsh word about anyone. She will be missed terribly by her husband of almost 45 years, John Faulkner, her son Stephen Ethington of Nicholasville KY her daughter Shannon Haas of Hartsville, SC., her step-son Steven Faulkner of Boston MA, and her step-daughter Jodi Ann Faulkner of Dartmouth NS, Canada, her brother, Ken Miller of Washington, NJ. Linda also leaves behind 6 grandchildren, Christopher, Kevin, and Kayla of Hartsville SC, Melissa, and Olivia of Lexington KY and Courtney of St. Louis MO. She also leaves 5 great-grandchildren, Stella, Sarah, Isaac, Henry, and Hazel who she adored. They will all miss their "Nana". In lieu of flowers, memorials may be made to the Hartsville Memorial Library, 147 West College Ave. Hartsville, SC 29550 or to the Darlington County Humane Society, PO Box 1655 Hartsville, SC 29551 A celebration of life will be held at 4:00 p.m. on Thursday, April 28, 2022, in the Chapel of Brown-Pennington-Atkins Funeral Home. The family will receive friends following the service. “THERE IS A STRONG BELIEF, THAT ON SOME DISTANT SHORE, FREE FROM PAIN & GRIEF, OLD FRIENDS WILL MEET ONCE MORE.”

Linda Faulkner (nee Miller) was born in Newark, NJ in May of 1943 and grew up in the neighboring town of Short Hills, NJ. She was the daughter of Howard Miller who headed the structural engineering department at the PSE&G laboratory in New Jersey.... View Obituary & Service Information

The family of Mrs. Linda Miller Faulkner created this Life Tributes page to make it easy to share your memories.

Linda Faulkner (nee Miller) was born in Newark, NJ in May of...