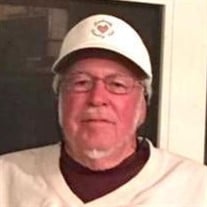 It is with deep sorrow that the Freeman family announces the death of Mr. Kenneth McAurthur "Tick" Freeman, 79, of Hartsville, SC. Mr. Freeman entered into rest peacefully this Saturday morning, April 23, 2022. The Directors of Brown-Pennington-Atkins Funeral Home & Crematory are caring for the family. A funeral service to honor his life will be held at 3 o'clock on Monday, April 25, 2022, in The Chapel of Brown-Pennington-Atkins Funeral Home, with The Rev. Steve Winburn officiating. The family will receive friends one hour prior to the service and other times at the home of Clint and Linda Freeman, 1840 E. Home Avenue, Hartsville, SC. Mr. Freeman, better known as "Tick," was born in Hartsville, SC. He was the son of the late Willie Freeman and the late Bertie Walters Freeman. Tick loved his family dearly and was especially fond of his grandchildren, Taylor and Chloe. He was an avid golfer and an accomplished card player, he enjoyed going to casinos with his friends and family as often as he could. Tick was a consummate salesman and worked for many years with Northcutt Motors until he started working for himself at K & F Motors. Eventually, he went on to join the sales team at Brown's RV, where he was on staff until his passing. He is survived by his sons, Trey Freeman of Hartsville, SC, and Chad (April) Truluck of Live Oak, FL; brothers, Clint (Linda) Freeman of Hartsville, SC, Billy Wayne (Sandra) Freeman of Hartsville, SC; sister, Sylvia (Bill) Plummer of Oates, SC; sister-in-law, Wendy Freeman of Hartsville, SC; grandchildren, Taylor Truluck, and Chloe Truluck; special friends, Lawrence (Cindy) Lowe, William Johnson, and Bert Warren. In addition to his parents, he was preceded in death by his wife, Connie Truluck; brothers, Curtis Freeman and William Boyd Freeman.

It is with deep sorrow that the Freeman family announces the death of Mr. Kenneth McAurthur "Tick" Freeman, 79, of Hartsville, SC. Mr. Freeman entered into rest peacefully this Saturday morning, April 23, 2022. The Directors of Brown-Pennington-Atkins... View Obituary & Service Information

The family of Mr. Kenneth M. "Tick" Freeman created this Life Tributes page to make it easy to share your memories.

It is with deep sorrow that the Freeman family announces the...