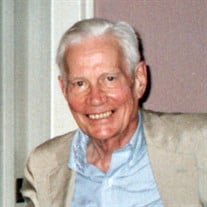 Mass of Christian Burial for Joseph James Lawton, II, 89, will be held at 11 o'clock on Wednesday, October 13, 2021, at St. Mary the Virgin Mother Roman Catholic Church, with The Very Rev. Timothy S. Reid as Celebrant. Final commendation and farewell prayers will be private in Magnolia Cemetery. Brown-Pennington-Atkins Funeral Directors are serving the family. Joseph James Lawton II. 89, died at home in Charlotte, N.C., on October 7, 2021 with his wife, Cindy Craig Lawton, at his side. He was born on June 5,1932 in Hartsville, SC and was the son of Louise Amis Lawton and Edgar Herbert Lawton of Hartsville, SC. Joe grew up in Hartsville on Prestwood Lake with many friends and cousins. He graduated from The Choate School in Wallingford, Connecticut in 1950 and from Princeton University with high honors in 1954, where he studied medieval history. He received his Masters in Music from Indiana University. Joe was a piano virtuoso and played at The Brevard Music Festival as a young man. After serving a year in the army, he worked with his brother, Edgar, at the Hartsville Oil Mill where he was plant manager and vice-president for 25 years. Joe was a board member of Coker University, Coker University Foundation, and The S.C. Governor’s School for the Arts and Humanities in Greenville, SC. His first wife was Penn Anthony with whom they had a son, Dr. Joseph James Lawton III. They lived in Hartsville for many years. After he retired from the Hartsville Oil Mill, Mr. Lawton decided to pursue his love of music and history, his focus of study at Indiana and Princeton. He practiced the piano, becoming a concert pianist who played numerous events, including with the New Haven CT Symphony. His passion was traveling in Europe to visit the historic homes of the great classical romantic composers. After a long courtship, he married Cindy Craig in 1999. Joe and Cindy enjoyed travel throughout Europe. They lived in Vienna for ten years allowing them to study the great composers. They made many friends and led tours for American lovers of classical romantic music to the places where Schubert, his favorite, lived and worked. Mr. Lawton is survived by his son, Dr. Joseph James Lawton III and his wife, Coles Jackson Lawton, and his three grandchildren, Coles Hayward Lawton, Louisa Dubose Dwight Lawton, and Joseph James Lawton IV. Joseph J. Lawton II is also survived by his brother, Edgar H. Lawton Jr. and his wife, Nan Davidson Lawton, Edgar H. Lawton III, John Davidson Lawton, Louise Amis Lawton, eleven grandchildren and one great-grandchild. In lieu of flowers memorials may be made to Margaret Coker Music Dept. at Coker University, 300 E. College Avenue, Hartsville, SC, 29550.

The family of Mr. Joseph James Lawton, II created this Life Tributes page to make it easy to share your memories.

Mass of Christian Burial for Joseph James Lawton, II, 89, will...