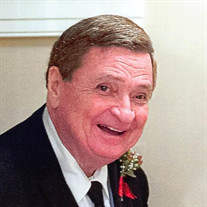 Graveside funeral services for Joseph "Joe" Maxcy Lavender, 81, will be held at 1:00 pm on Sunday; October 11, 2020 at Magnolia Cemetery in Hartsville, directed by Brown-Pennington-Atkins Funeral Home. Mr. Lavender died Friday, October 9, 2020. He was born March 27, 1939, in New Zion, South Carolina, the son of Velma Faye Floyd and William Maxcy Lavender. He came to Hartsville in November 1968 as a tax preparer with H&R Block. His first job with H&R Block was more than half a century ago in Sumter. Over the years, he worked his way up from tax preparer to district manager to a successful franchise owner. At one time he owned as many as 20 franchises. In recent years, Mr. Lavender started cutting back, but retained five franchises, including the H&R Block franchise in Hartsville, Darlington, Bishopville, Lake City, and Hemingway. He was in the mini-storage business and at one time owned more than 700 mini-storage units. He also was a licensed real estate broker and appraiser, both commercial and residential. In 1963, he started racing cars. During his career, mostly on dirt tracks, he dominated many of the tracks he ran on, winning more than 400 races. He also enjoyed watching his sons on the racetrack. He was also owner and promoter of Hartsville-Darlington Speedway, Sumter Speedway, and Florence I95 Speedway. His greatest love was his family. He is survived by his five children, Joey (Vickie) Lavender of Florence, Linda (Mike) Harrington of New Zion, Katherine (Tommy Nolan) Grainger of Hartsville, Jody (Tara) Lavender of Murrells Inlet and Jo Ann (Ryan) Richardson of Columbia; seven grandchildren, Michael (Lauren) Harrington of Anderson, Daniel (Becky) Harrington of Florence, Heather (Matt) Arvidson of Florence, Emily Lavender of Florence, Taylor Lavender and Chase Lavender of Murrells Inlet, and Walker Richardson of Columbia; and two great-grandchildren, Katie Arvidson and Lexi Arvidson of Florence; a brother, Dr. Abraham Lavender of Miami Beach, Florida; a sister, Marge McFaddin of Eatonton, Georgia. Pallbearers are Michael Harrington, Daniel Harrington, Matt Arvidson, Jamey Jordan, Greg McElveen, and Scott Grainger. Memorials may be made to First Baptist Church of Hartsville, 104 E. Home Ave., Hartsville, S.C. 29550 or Darlington County Humane Society, 1705 Adoption Way, Darlington, SC 29532. The family would like to extend a special thanks to Dr. T. James "Jimmy" Bell and Jamey Jordan for all their assistance throughout the years. Joe Lavender loved his family. He gave generously of his love to his five children and was known affectionately as “Papa Joe” to his grandchildren and great-grandchildren. To the community, he was “Mr. H & R Block". He started racing cars in 1963. It would become a great part of his life. He also supported his two sons who followed in his footsteps. When he applied for a job at H&R Block more than half a century ago, he had very little and knew nothing about the tax business. Over the years, he worked his way up from tax preparer to district manager to a successful franchise owner. At one time he owned as many as 20 franchises. Joe never let challenges hinder him in what he wanted to do. He was determined to achieve many goals in his lifetime – business owner, race car driver, and father. He said success is all about timing. He was successful in many endeavors throughout his life. He came to Hartsville in November of 1968 in a 1960 Volkswagen convertible and stayed in a one-bedroom apartment on the corner of Sixth Street and College Avenue. “I’m a participant not a spectator,” Joe said in an interview in 2017 with the Hartsville Messenger. He gave this advice for others starting out during the interview with the newspaper. He said “Set realistic goals and know your priorities. Realize that you are going to have to make some sacrifices and work hard. There will be mistakes but profit from them. He said always in the back of his head was the notion “If it is worth doing, it is worth doing right.”

The family of Mr. Joseph Maxcy Lavender created this Life Tributes page to make it easy to share your memories.