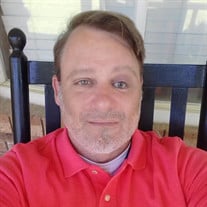 A funeral service for Mr. Joseph Owen Elmore, 41, who entered into rest on Sunday, June 13, 2021, will be held at 4 o'clock on Thursday, June 17, 2021, in Clyde Church of God. Bishop Daniel Poston and The Rev. Thad Jacobs will officiate with burial to follow in the church cemetery. The family will receive friends from 5:00 until 7:00 pm on Wednesday at Brown-Pennington-Atkins Funeral Home. In lieu of flowers, memorials may be made to St. Jude's Children's Research Hospital, PO Box 50, Memphis, TN 38101-9929. Born in Moore County, NC, he was a son of Ronald Joseph Elmore and Kimmie Polston Elmore. He graduated from Hartsville High School in 1997 and earned a Welding Certification from Florence-Darlington Technical College in 1998, followed by a degree in Accounting in 1999, and in 2001, he earned his LPN Nursing Degree. He started his career in nursing at Morrell Nursing Home in 2001, where he was a Supervisor. Joseph's love for long-term care started then and never ended. He referred to the patients as, "My family." Joseph's entire nursing journey remained in long-term care with "His family." Since his passing, many family members of Morrell and other facilities have reached out to share a beautiful memory with his family of how much they appreciated how their son had embraced and loved their family members as his own. Love and compassion only begin to describe Joseph, his life, and his love for others. Joseph was an avid Gamecock fan and loved to fish. He was accomplished in many areas, but his greatest accomplishment was his three children whom he loved dearly. He is survived by his son, Ashton Chase Elmore of Hartsville, SC, daughters, Kensleigh Logan Elmore of Florence, SC, Brooklyn Victoria Elmore of Hartsville, SC; father and mother, Ronald Joseph Elmore and Kimmie "Kim" Polston Elmore of Hartsville, SC; brother, Ronald Joseph Elmore, Jr; maternal grandparents, Richard Joseph Polston. He was preceded in death by his daughter, Tiffany C. Elmore; paternal grandparents, Everette & Ruth Elmore; maternal grandmother, Cynthia Polston.

A funeral service for Mr. Joseph Owen Elmore, 41, who entered into rest on Sunday, June 13, 2021, will be held at 4 o'clock on Thursday, June 17, 2021, in Clyde Church of God. Bishop Daniel Poston and The Rev. Thad Jacobs will officiate with... View Obituary & Service Information

The family of Mr. Joseph Owen Elmore created this Life Tributes page to make it easy to share your memories.

A funeral service for Mr. Joseph Owen Elmore, 41, who entered...