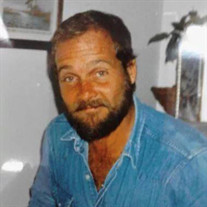 A Celebration of Life Service for Mr. John Lesley Gainey, 61, will be held at 4:00 pm on Saturday, March 7, 2020 in the Chapel of Brown-Pennington-Atkins Funeral Home. The Rev. Marvin Griggs will officiate. The family will receive friends one hour prior to the service. Mr. Gainey entered into rest on Thursday, January 16, 2020. He was born in Darlington County, SC to the late Harget David Gainey, Sr. and the late Ann Sauls Johnson. John was a jack of all trades and enjoyed working outdoors. He was a man of respect and integrity. He was often seen in his cowboy hat and boots with spurs. He enjoyed riding his Harley Davidson and chocolate ice cream was a favorite. He had an excellent talent for drawing. John always said that having his daughter was the best thing that ever happened in his life. Surviving are his daughter and son-in-law, Kristin Gainey Glover and Daniel Glover; sister, Theresa Bellamy; brother and sister-in-law, Steven and Frances Gainey; nephews, David R. Gainey, Brandon Gainey, T. J. Campbell, Eric Campbell; nieces and spouses, Sissy and Trent Stengel, Christina and Tim Savoy; numerous great-nieces and great-nephews. In addition to his parents, he was preceded in death by his maternal grandparents David Rodger Sauls, Sr. and Olga Lee Flowers Sauls; paternal grandparents, John M. Gainey and Alma Flora Barefoot Gainey; brother, Harget David Gainey, Jr.; nephews Daniel Gainey and Steven Gainey, Jr. The family would like to express gratitude to Wilma Todd for her home-cooked meals and for being an outstanding friend and neighbor. The family would also like to express gratitude to his "favorite cousin", Libby Harding, for her care, compassion and for being with his daughter during John's final moments. In lieu of flowers, memorials may be made to the COPD Foundation, 3300 Ponce De Leon Blvd, Miami, FL 33134 or online at https://www.copdfoundation.org.

A Celebration of Life Service for Mr. John Lesley Gainey, 61, will be held at 4:00 pm on Saturday, March 7, 2020 in the Chapel of Brown-Pennington-Atkins Funeral Home. The Rev. Marvin Griggs will officiate. The family will receive friends one... View Obituary & Service Information

The family of Mr. John Lesley Gainey created this Life Tributes page to make it easy to share your memories.

A Celebration of Life Service for Mr. John Lesley Gainey, 61,...