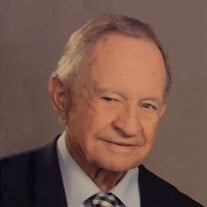 Private graveside funeral services for Mr. John Crues Bell, Jr., 92, who entered into rest on Thursday, April 16, 2020, will be held on Saturday, April 18, 2020, at the Bishopville Presbyterian Church. The Rev. Chris Parnell will officiate, and Hancock-Elmore-Hill Funeral Home is caring for the family. In lieu of flowers, memorials may be made in his honor to Bishopville Presbyterian Church, 215 South Main Street, Bishopville, SC 29010. Mr. Bell was the son of the late John Crues and Carmen Pound Bell of Inman and Spartanburg, SC. Born in Roanoke, AL, he attended elementary and high school in Inman, SC, and was a graduate of Presbyterian College, Class of 1947. He also did graduate study at Georgia Tech. His career in textile finishing began with Pacific Mills, Lyman, SC, and with Reeves Brothers Finishing Division in Bishopville, SC, where he retired as General Manager in 1992, after 34 years of service. Mr. Bell served as elder and Clerk of Session in the Bishopville Presbyterian Church. He served on the Board of Visitors at Presbyterian College and held many civic and honorary positions in Bishopville and Lee County. He was a member of the Bishopville Country Club and enjoyed golf with his friends. He is survived by his wife of 70 years, Doris Bird Bell; daughter, Judy (Albert) Oliphant of Rock Hill, SC, Cindy (Green) DesChamps of Bishopville, SC; son, John Crues (Renee) Bell III of Bishopville, SC; sister, Kathleen Townsend of Edenton, NC. He was a proud grandfather of seven grandchildren, John Crues (Paige) Bell IV, Catherine Bell (Blake) Smith, Bryant Calcutt "Cally" (Ally) Bell, Julia DesChamps (Barrett) Burley, William Green (Ashley) DesChamps IV, Albert Drane (Anne) Oliphant IV, Joan Oliphant (Brian) Boyer; twelve great-grandchildren. In addition to his parents, he was preceded in death by a brother, Ben Bell of Florence, SC. Due to the Coronavirus Pandemic, there will be a memorial service held at a later date to honor our loving daddy, granddaddy, and great-granddaddy.

The family of Mr. John Crues Bell Jr. created this Life Tributes page to make it easy to share your memories.