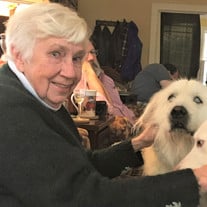 Johanna Margaretha Godbey, née Gratama, was born Feb 4, 1932, near Cheribon, Indonesia on the island of Java. She was the daughter of Bernard Jan Gratama and Elisabeth Tjalda Hoorweg. Her father was a chemist working at a Dutch East Indies sugar factory until the invasion of Indonesia by the Japanese in 1942. Although the family was separated, they survived three years in Japanese concentration camps. At the end of the war, they were reunited and returned to The Netherlands to face the economic struggles of post-war Europe. Johanna, known as Greta, planned to become an air hostess for KLM. In order to improve her French language skills, she worked at a laundry near a United States airbase outside of Casablanca, Morocco. It was there that she met her husband, John Charles Godbey. Following a whirlwind courtship, they were married on May 26, 1954, in Casablanca. In 1955 they moved to the United States. He was captivated by her beauty and intelligence, and she had never met a man so intellectually curious who, at the age of twenty-seven, was already a well-read scholar. She spoke her mind; he listened, valued, and challenged her opinions. As a couple, they celebrated forty-five years of marriage and never lacked for stimulating and invigorating conversations. Greta was well-prepared to make ends meet as the wife of a graduate student. While John finished his doctorate at the University of Chicago’s Divinity School, she raised three boys, Bernard John, Charles Frederick, and Nicholas Robert, and one daughter, Margaret June. She was a loving and involved mother who was active in her children’s lives. In addition to sewing unique Halloween costumes, she served as a Cub Scout Den Mother and a Camp Fire Girls group leader for many years. Greta returned to school and earned a B.S. in Mathematics and completed all course-work for an M.A. in Mathematics from Chicago State University. She taught math in the Chicago public high schools for several years and then moved into the position of Assistant to the Graduate Dean of Humanities at the University of Chicago. She excelled in guiding American and International graduate students through the often Byzantine paperwork required by the University. Over the course of her life, she became a self-taught medievalist focused on Viking sagas and the writings of medieval women. Greta and John were active members of the First Unitarian Church in Hyde Park for over forty years. Greta regularly opened their home to members of the faculty, staff, and graduate students of Meadville Lombard Theological School, where John, a Unitarian Universalist minister, served as Professor of Unitarian Church History and Dean of the College. As a couple, they enjoyed camping, tennis, and travel throughout the United States, Europe, and Asia. Greta was an avid naturalist, a bird-watcher, and a friend to all dogs. A talented gardener, she grew a towering white pine tree in a small Chicago yard; in Ardmore, PA, hawks and foxes and rabbits all found their way into her garden. Music was an important part of her life. She enjoyed concerts and operas, chamber music and recitals, vocal and orchestral music of all kinds. No matter where she was, Greta sought a choir to join. Over the years she sang with several church choirs, university-affiliated choirs, and Renaissance choirs. In 1981, Greta and John weathered the sudden death of their eldest son, Bernard John. For the loving and close-knit family, this was a traumatic, devastating loss. Following John’s death from Parkinson’s in 1999, Greta moved to Ardmore, PA to be near her daughter Margaret. She enjoyed the proximity to musical events in Philadelphia and the fellowship of the Main Line Unitarian Church in Devon, PA, where she served in a variety of capacities including choir-member and book store manager. When Margaret earned tenure at Coker University in Hartsville, SC, Greta moved one more time. The move allowed her to live independently for an additional five years, and once again, Greta found a choir. Members of the First Presbyterian Church welcomed her and gave her their friendship and their grace even when she became too ill to continue. The choir sang Christmas carols at her house and serenaded her from outside her bedroom window when she was too weak to rise; these acts of kindness were greatly appreciated. Greta is survived by her sister, Mrs. Lucie Alberti of Colombier, Switzerland; son Charles (Helenna) of Chicago, IL; son Nicholas (Alice) of Grapevine, TX; daughter Margaret (David Hellen) of Hartsville, SC; five grandchildren: Veronica Wannberg, Alexander Godbey, Katherine LaBrier, Caitlin O’Brien, and Michael Hellen; seven great-grandchildren: Joseph, Elizabeth, Angela, and Lara Wannberg; Isabella, Sophia, and Oliver Godbey. She was preceded in death by her husband John Charles Godbey, brother Nicolas Gratama, and son Bernard John Godbey. A private service will be held in Hartsville, SC on Tuesday, July 7. Greta’s ashes will be interred with John’s at the First Unitarian Church in Chicago, IL at a later, and safer, date. In lieu of flowers, memorials may be made to organizations Greta supported: Best Friends Animal Society, Kanab, Utah; https://bestfriends.org/ Darlington County Humane Society, Darlington, SC; https://darlingtonhumane.org/ The Nature Conservancy; https://www.nature.org/en-us/

Johanna Margaretha Godbey, née Gratama, was born Feb 4, 1932, near Cheribon, Indonesia on the island of Java. She was the daughter of Bernard Jan Gratama and Elisabeth Tjalda Hoorweg. Her father was a chemist working at a Dutch East Indies sugar... View Obituary & Service Information

The family of Mrs. Johanna Margaretha Godbey created this Life Tributes page to make it easy to share your memories.