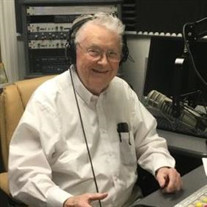 "It’s been a Happy Time" Jan Raymond Caddell, passed away Tuesday, December 7, 2021 after a long illness. He was born Sunday, January 28, 1940 in Florence, SC to Raymond and Margaret Caddell. Jan’s family moved to Hartsville, SC in 1947 where his father became General Manager of a Broadcasting Company WHSC. After graduation from Hartsville High School in 1958 he attended the University of South Carolina. He joined the US Navy and after discharge began a career in broadcasting. In 1960, Jan married the love of his life Lucy Leigh Tyner. His career in broadcasting continued and in 1967 they moved to West Jefferson, NC to join Radio Station WKSK. Jan was a faithful member of West Jefferson United Methodist Church. He was a great supporter of the community, serving on many boards and committees. He was a member of NC Association of Broadcasters and achieved the NC Distinguished Community Service Award. Jan is survived by: daughter, Charlotte C. Thompson and husband Jimmy of West Jefferson, son, E. Graham Caddell and wife, Carrie of Jefferson, grandsons Grant Thompson, Wesley Thompson and granddaughter, Keely Caddell and brother, Alan Caddell of Hickory. He was preceded in death by his wife, Lucy Leigh Tyner Caddell, and a son, Jan R. Caddell Jr. Funeral services will be private. The family respectfully request no flowers please, memorials contributions may be made to: Jan and Lucy Caddell Legacy Scholarship Fund, c/o Ashe Advantage Project, PO Box 31, West Jefferson, NC 28694. A celebration of life service for Jan and Lucy will be held at a later date. Posted as a courtesy to local family and friends.

The family of Mr. Jan Raymond Caddell created this Life Tributes page to make it easy to share your memories.

&quot;It’s been a Happy Time&quot;