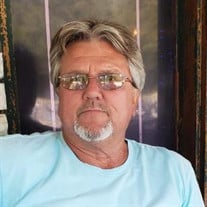 It is with deep sorrow that Mrs. Carrol Smith Rogers announces the death of her beloved husband, James Lee Rogers, 62. Mr. Rogers entered into rest on April 24, 2022. The Directors of Brown-Pennington-Atkins Funeral Home & Crematory are caring for the family. A service to honor his life will be held at 3:00 pm on Friday, April 29th, 2022, in the Chapel of Brown-Pennington-Atkins Funeral Home. The Rev. Alvin Rogers will officiate with burial to follow in Darlington Memory Gardens. The family will receive friends from 5:00 pm until 7:00 pm on Thursday at the funeral home. Born in Hartsville, SC, he was the son of the late William Rogers and the late Barbara Stolarski Rogers. Jimmy, better known as QC, which many would understand because of his quality control outlook on life, served in the United States Army for three years. He then worked for Sumter Builders with his good friend, Wendell Brown, and later proudly retired from Santee Cooper Electric with over twenty years of service. His second home was on Lake Marion in Santee, fishing, and boating with Larry, Phillip, and Paul. They always brought in some of the largest bass and catfish. He loved jumping on his Harley and spending time out in the country riding without a care in the world. Left to cherish his memory are his wife, Carrol Smith Rogers of Hartsville, SC; son Daniel Smith (Jessica) of Hartsville, SC; daughter, Katelynn Rogers (John Stokes) of Hartsville, SC; brothers, William F. "Furniss" Rogers, Frank Rogers (Vicky), John Rogers all of Hartsville, SC; sister, Kelly Easterling (Ricky) of Hartsville, SC; grandchildren, Kayleigh Watkins, Evan Smith, Brea Smith, Maddox Stokes, Hazel Stokes. In addition to his parents, he was preceded in death by his sister, Barbara J. Beasley.

It is with deep sorrow that Mrs. Carrol Smith Rogers announces the death of her beloved husband, James Lee Rogers, 62. Mr. Rogers entered into rest on April 24, 2022. The Directors of Brown-Pennington-Atkins Funeral Home & Crematory are caring... View Obituary & Service Information

The family of Mr. James Lee Rogers created this Life Tributes page to make it easy to share your memories.

It is with deep sorrow that Mrs. Carrol Smith Rogers announces...