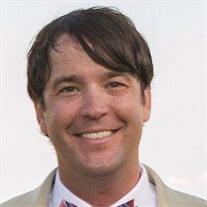 James Robert “Bert” Griggs III, 37, of Mount Pleasant, SC, passed away on December 17th, 2019 at MUSC Hospital in Charleston. Bert was born on December 10, 1982, and was raised in the Byrdtown community in Hartsville, SC. Surrounded by a huge family and lifelong friends, he loved growing up in the country riding tractors and four-wheelers, being mischievous, as well as taking numerous family camping trips. Bert also loved spending countless hours playing alongside his sis (his original partner-in-crime) and never seemed to mind when she insisted on dressing him up as a doll baby. He went to Hartsville High School where he excelled in soccer and entertaining at the pond house. Bert later graduated from the College of Charleston with a B.S. in Business Administration. He remained in Charleston for four years after college working in all aspects of the hospitality industry while building meaningful, long-lasting friendships. It wasn’t long before the mountains called his name and he headed to Jackson Hole to pursue his love of snowboarding. While there, Bert was the sales and marketing director of a hotel group that gave him the opportunity to travel to world-class ski resorts all over the country as an ambassador for Jackson Hole. He met his wife Lorrie while she was vacationing there and discovered they both had a love of traveling to see live music and a plethora of mutual friends. Following a whirlwind romance, they married on April Fools’ Day atop the mountain. Together they created Drifter Merch, an apparel company dedicated to their love of music. Soon after, they returned to Charleston and a year later the light of their lives, Harper Grace, was born. Bert was an amazing father, husband, son, brother, and friend. Bert had an innate ability to make everyone he met feel like they were the most important person in the room. He never met a stranger. In fact, he was everyone’s best friend. He had the sweetest soul and a tender heart that loved hard and loved deep. Bert had a unique sense of humor with an infectious laugh and smile that could light up the darkest room. He will be deeply missed. Bert is survived by wife, Lorrie Griggs; daughter, Harper Griggs; parents, Cindy and Bobby Griggs; sister, Leigh Cason (Lander); grandparents, Robert Griggs (Betty Sue); in-laws, Patsy and Bill Dixson; brother, in-law, Will Dixson (Susan); nieces, Griggs Cason and Mary Dixson, nephews Louie Cason and Liam Dixson, as well as numerous aunts, uncles, and cousins. Bert was preceded in death by grandparents, Doris Griggs, Maysel Johnson, Calhoun Johnson, and his golden retriever, Dickey Betts. Visitation for friends and family will be held at Brown-Pennington-Atkins Funeral Home in Hartsville, SC on Friday, December 20th from 5-7 pm. Bert's funeral, followed by a cemetery burial, will be on Saturday, December 21st at 2 pm at Bethlehem United Methodist Church. In lieu of flowers, gifts may be made to Sharing Hope SC https://sharinghopesc.org/give-now/ and to Pet Helpers https://pethelpers.org/donate/

The family of Mr. James Robert “Bert” Griggs III created this Life Tributes page to make it easy to share your memories.