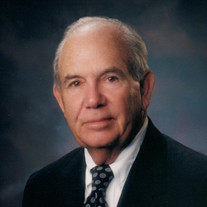 Graveside services for Mr. James Gladney McGee, Jr., 91, will be held at 12:00 pm Friday, November 6, 2020, in Magnolia Cemetery. The Rev. William D. "Bill" Oldland will officiate. The family will receive friends following the service in accordance with social distancing guidelines. Mr. McGee slipped serenely away at his home on Tuesday, November 3, 2020. Born in Hartsville, SC, he was a son of the late Gladney McGee and Elizabeth Williams McGee. He was a graduate of Clemson University, served on active duty in the U, S. Army during the Korean War, and was honorably discharged as a 1st Lieutenant in 1955. Jim was retired from Sonoco Products Company with 34 years of service, beginning as a management trainee in 1955. He served as President of Sonoco International; Chairman of the Board of Sonoco, Ltd, Canada, and served on the Board of Directors for Sonoco de Mexico, Sonoco United Kingdom, Pak Pacific Corporation-Australia, and Showa Products Ltd. He previously held the position of Vice President of the company's Industrial Packaging Group, Division Vice President for the General Products, General Manager of Plastics Division, Folding Carton Division, Partitions Division, and Manager of the Duropipe plant. After Jim was discharged from the Army, he returned to Hartsville committed to repaying the Boy Scouts of America for the time that he spent in scouting as a boy and young man. He worked in the Boy Scouts for the next decade as Scoutmaster, District Commissioner, and District Chairman. He also was involved with the United Way, Hartsville Museum, and South State Museum Foundation. Jim was a member of the Advisory Board for the College of Commerce and Industry and International Trade Advisory Council for Clemson University. He was also a member of the South Carolina Governor's Council on International Trade and the U. S. Chamber of Commerce. He served on the Board of Visitors for Clemson University and participated in the Executive Development Program at the University of South Carolina and High Point College. Surviving are his daughters, Renee Bock (Wally), Claire Howle (Harry); son, Jim McGee III (Kathy); seven grandchildren; seven great-grandchildren. He was predeceased by his wonderful partner and wife of 65 years, Claire Redman McGee. The family requests that in lieu of flowers, memorials may be made to St. Bartholomew's Church, 103 Campus Dr., Hartsville, SC 29550, or Clemson University Foundation, Clemson/Sonoco Scholarship, Box 1889, Clemson, SC 29633-9972.

The family of Mr. James Gladney "Jim" McGee Jr. created this Life Tributes page to make it easy to share your memories.