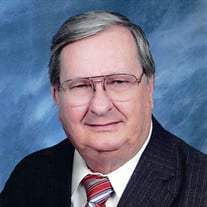 A graveside funeral service with Masonic Rites for Mr. Horace Cox Beasley, 84, will be held at 3:00 pm on Tuesday, November 9th, 2021, in the Hebron United Methodist Church Cemetery with The Rev. Jerry McManus officiating. Friends may pay their respects and sign the guest book on Monday between 3:00 p.m. and 5:00 p.m. at Brown-Pennington-Atkins Funeral Home. Mr. Beasley entered into rest on Saturday, November 6, 2021, at his home. Born in Lee County, SC, he was a son of the late Edward Jennings Beasley and the late Margaret Elizabeth Cox Beasley. He was a graduate of Bishopville High School and a lifelong member of Hebron United Methodist Church in Stokes Bridge. Mr. Beasley was a Master Mason for 53 years and a member of the Patesville Masonic Lodge #295, where he was raised on March 28, 1968. He served the Lodge as Worshipful Master from 1989-90 and again from 2010-12. He was also a member of the Shriners Omar Temple and a member of the Sons of the American Revolution. Mr. Beasley retired from the United States Postal service after 27 years of service. He was a part-time farmer and also an avid HAM radio operator who participated in the MARS radio program during the Vietnam War, allowing servicemen overseas to talk with their families at home. He also served as a captain with the Una-Alcott Volunteer Fire Department, and adjutant of the James Lide Coker chapter of the SCV. Surviving are his wife, Linda Kelley Beasley of Bishopville, SC; children, Dr. Horace E. Beasley (Tamara) of Columbia, SC, June E. Beasley of Athens, GA, Darin E. Beasley of Athens, GA; grandchildren, Dr. John Beasley (Maria), Ryan Beasley, Brittany Beasley, Sarah Beasley; great-grandchildren, Marleigh Beasley, and Naomi Beasley. In addition to his parents, he was preceded in death by his brothers, William Thelbert Beasley and Treze Jennings Beasley. The family wishes to express their gratitude to Amedysis Home Health Care and Kindred Home Care for their compassionate service. In lieu of flowers, the family requests donations be made to St. Jude Children's Research Hospital, 501 St. Jude Place, Memphis, TN 38105, or by visiting: www.stjude.org/donate.

A graveside funeral service with Masonic Rites for Mr. Horace Cox Beasley, 84, will be held at 3:00 pm on Tuesday, November 9th, 2021, in the Hebron United Methodist Church Cemetery with The Rev. Jerry McManus officiating. Friends may pay their... View Obituary & Service Information

The family of Mr. Horace Cox Beasley created this Life Tributes page to make it easy to share your memories.

A graveside funeral service with Masonic Rites for Mr. Horace...