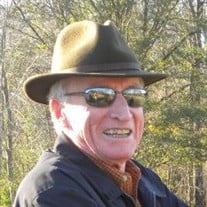 Harry L. Hill passed into the arms of our Lord on Saturday, July 24, 2021. A celebration of his life well lived will be held at 1:00 pm on Tuesday, July 27, 2021, in the First Presbyterian Church, 213 Home Avenue, Hartsville, SC. The family will receive friends following the service in the church narthex. Harry is the eldest son of Edna and J.W. Hill of Toccoa, GA. He is survived by his son, Leon (Micki) Hill; two daughters, Deborah (Tim) Griggs and Sharon Hogan; grandchildren, Jessica Griggs, Hillary (Bogan) Hall, Alec (Chelsea) Owens, and AnnaCatherine (James) Dunlevy; great-grandchildren, Grayson Griggs, EmyKate Hall, and Brody Hall. Harry served in the U.S. Navy stationed in Hawaii. Upon returning to South Carolina, he met and married his beautiful wife, Patricia Hill, in 1953. They moved near Clemson, where he graduated with a degree in Textile Engineering. He and Pat were big Clemson fans. They attended as many games as they could at Death Valley. Harry had a challenging and successful career in the textile industry. In the early 60’s he was the plant director for Formex Division in Greeneville. In 1964, he was picked to assist in two plant construction and startups in Europe. As a result, The Hill family spent an exciting year in Whitstable in Kent, United Kingdom, and in Rome, Italy. The Hills subsequently moved to Asheville, NC, where he assisted in the construction and startup of a Weaverville factory. Harry had always wanted to return to his home state of South Carolina. That opportunity presented itself in the late 70s when they moved to Walterboro. Wherever he lived, he was an active member of the community and the Church. He served on the board of the Bank of Walterboro. (Now bank of the Low Country) He was active in SCORE in Walterboro and in Hartsville, SC. He also served on the South Carolina Governor’s Development Board. There he worked to expand education initiatives to encourage a skilled and responsive workforce. Upon Harry’s retirement, they moved closer to their daughter, Deborah, in Hartsville and later to The Manor. Harry had a long and interesting life. He and Pat traveled the world and lived life to its fullest. He loved to tell stories of his work life in Italy and the U.K. and subsequent travels to Russia, Finland, Germany, around the U.S., and Canada. Lastly, the family is grateful for the love and prayers of family and friends and the wonderful staff in the healthcare section at The Manor in Florence, SC. We thank you. Memorials may be made to the First Presbyterian Church, 213 Home Ave, Hartsville, SC 29550. Brown-Pennington-Atkins Funeral Directors are caring for the family.

Harry L. Hill passed into the arms of our Lord on Saturday, July 24, 2021. A celebration of his life well lived will be held at 1:00 pm on Tuesday, July 27, 2021, in the First Presbyterian Church, 213 Home Avenue, Hartsville, SC. The family... View Obituary & Service Information

The family of Mr. Harry Leon Hill Sr. created this Life Tributes page to make it easy to share your memories.

Harry L. Hill passed into the arms of our Lord on Saturday, July...