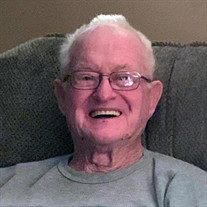 Mr. Harry Lee “Doodle” Gainey, 83, entered into rest on Monday, April 26, 2021. A graveside celebration of the life of will be held at 2 o'clock on Wednesday, May 5, 2021, in Gainey Family Cemetery, 1240 Mainsail Drive, Hartsville, SC. The Rev. Steve Winburn will officiate, and the family will receive friends following the service. Brown-Pennington-Atkins Funeral Directors are caring for the family. Memorials may be made to hospice in his honor. Mr. Gainey was born in Hartsville, SC. He was the son of the late Lawrence and Docia (Hendrix) Gainey. Mr. Gainey married Carolyn Abbott of Darlington, SC. They had three children, Ed, Susie, and Melissa (Ken). Harry was a devoted Christian, member, and Deacon of Fourth Street Baptist Church. He was a loving father and friend. He loved his family so much that he built homes for his two girls right next to one another and one house over from his. The two of them thought he walked on water. Harry was a self-made man, and began at an early age, making brooms, and going door-to-door to sell them, and for 25 cents, he would also sweep your yard! He was a sweeper at the Hartsville Cotton Mill when he was approached with a job offer that began his big career. Harry retired twice from Vamatex out of Italy. This job took him to many places all around the world before he retired as Vice President of Sales for this international company. Later he became a consultant to give him more time to be with his family and be personally involved in his rental company back home. He also developed two local neighborhoods, providing homes for his community. Harry was an avid jogger, ran a 10K in his 50's, and could do a one-handed pushup. As he grew older, he continued walking every day in his neighborhood that his family still resides in. He was an honest, fun-loving, charismatic ham-bone. He was fair and gave credit where credit was due. He was often sought after for his advice, and his brutally honest words of wisdom rang true. He was respected for the advice and help he gave whether you had to agree or disagree. You would still remain friends. He kept his jovial personality throughout the years and took it to heaven with him! He loved life and believed that it was the quality of life that was truly important. He is survived by his sons, Ed Gainey; daughters, Susie Carol Gainey, Melissa "Missy" Lee Gainey Myers; honorary daughter, Nicky Hopkins Edwards; grandchildren, Harley Hawkins, Kenzie Myers, Isabella Gainey, Taylor Gainey, Kaitlyn Gainey; His only great-grandchild, Nathan Alexander Hawkins; His closest friend, Alfred O'Neal, and had a special place in his heart for Patsy Abbott (Schofield), Evelyn Chisholm (Crazy Gal), Shirley Hall, Joyce Compton, and Louie Hauser, Tara Fields, and Ann Hedgepath. In addition to his parents, he was preceded in death by his spouses, Carolyn A. Gainey, and Kat Gainey; brothers, Billy Gainey, Bobbie Gainey; sister, Edna Gainey; granddaughter, Jessica Davis.

The family of Mr. Harry Lee “Doodle” Gainey created this Life Tributes page to make it easy to share your memories.