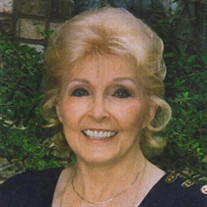 An extraordinary woman, Georgia Johnson Campbell, passed away on May 26, 2020, at her home in Parker, Texas. Georgia was the daughter of the late Sayers Beeman and Elsie Patton Johnson. She was born in Terry County in west Texas, where both the Johnsons and the Pattons have been ranchers and farmers since the early 1800s. Georgia attended Culver-Stockton College and St. Louis University, from which she graduated with a degree in English. She had a lilting soprano voice and loved to sing, performing in church and university select choirs, as well as other singing groups throughout her life. At one point she was selected to perform with the Billy Graham Crusade Choir under the direction of George Beverly Shea. In addition to her passion for music, Georgia loved and excelled in all areas of the arts, including painting and ballroom dancing. She looked at the world through an artist's eye. Most of her paintings are in oils, although she did experiment with watercolors later in life. Georgia was a fashion model for companies, department stores, print, and television throughout the Midwest, eventually teaching modeling, as well as staging and commentating for spectacular runway fashion shows. She was the MC for the National Wool of America Pageant and was offered an opportunity to become a part of the designer fashion show industry in New York City, which she turned down. In the late 1960s, Georgia moved to Fort Worth, Texas, where she became the Director of Public Relations for Casa Manana Theater-in-the-Round. In 1980 Georgia met the love of her life, Charles Hugh Campbell, Jr. From that point forward, they became inseparable. They married and lived in Hugh's hometown of Hartsville, South Carolina until Hugh's death in 2008. They had been married for twenty-eight years. Shortly thereafter, Georgia moved to Parker, Texas to live with her daughter Sandra McGuire. Georgia is survived by three daughters, Sandra L. McGuire of Parker, Texas; Deborah S. Dorsey and son-in-law William Dorsey of Statesville, North Carolina; and Linda K. Thurston and son-in-law Gregg Thurston of Phoenix, Arizona; stepdaughter, and stepson-in-law, Melanie Campbell and Robert E. Lee of Eugene OR. She is also survived by grandchildren, great-grandchildren, great-great-grandchildren, and one great-great-great-grandchild. She was preceded in death by her stepson, Charles Hugh Campbell III; brother, William Sayers Johnson of St. Louis, Missouri. A family graveside service will be held on Monday in Hartsville, South Carolina. The family has indicated that a Celebration of the Life of Georgia Campbell will be held in July in Parker, Texas.

An extraordinary woman, Georgia Johnson Campbell, passed away on May 26, 2020, at her home in Parker, Texas. Georgia was the daughter of the late Sayers Beeman and Elsie Patton Johnson. She was born in Terry County in west Texas, where both... View Obituary & Service Information

The family of Mrs. Georgia Johnson Campbell created this Life Tributes page to make it easy to share your memories.