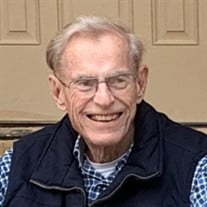 George McKinne Rider, Sr., 87, died at home on Friday, June 12, 2020. The son of Robert and Emily Rider was born May 30, 1933, in Mineola, New York. He attended public schools in Bellmore, New York, and was graduated from Mepham High School in 1951. He was awarded a US Navy scholarship to the University of South Carolina where he earned a B.S. degree in electrical engineering. Upon graduation in 1955, he was commissioned an ensign in the US Navy. He began basic flight training in Pensacola, Florida, and completed advanced training in Corpus Christi, Texas, receiving his wings as an aviator in September of 1956. He attained the rank of lieutenant before his discharge from active duty in August of 1958. George attended Moody Bible Institute in Chicago, Illinois, graduating with a degree in missions in 1960. He served with a non-governmental organization (NGO) in North Africa and France from 1961 to 1975 and then again from 1985 to 1998. He taught electrical engineering technology at Florence-Darlington Technical College during most of the intervening years and also earned a master’s degree from the University of South Carolina in electrical and computer engineering. He retired from the NGO in 1998 and settled with his wife in Hartsville, South Carolina. During retirement, he helped start Hartsville Presbyterian Church where he served as an elder and enjoyed spending time on the family farm. He is survived by his wife of 64 years, Anne Jordan Rider, and his children, Scott and Sarah Grubbs, Kinne and Lucille Rider, Bill Rider, Claude, and Carol Grunenwald, Tim and Amy Rider, twelve grandchildren, six great-grandchildren, and a sister, Patricia Rider Givens. He was preceded in death by three grandsons: Emmanuel Rider, Alexander Rider, and Jeffrey Grubbs. A graveside service will be held at Magnolia Cemetery in Hartsville, South Carolina, at 3 o'clock on June 14, 2020. The service will be conducted by Rev. David McIntosh, pastor of Hartsville Presbyterian Church. The public is invited to join in the celebration of God’s mercy and goodness to one of His children. The family greatly appreciated the professionalism and compassion shown to George by Dr. Samuel Okoh and his staff at Fresenius Dialysis, by Dr. John Ropp and his staff at Hospice Care of South Carolina, and by the caregivers: Renee, Lisa, Rosemary, Yvonne, and Tywanna. Brown-Pennington-Atkins Funeral Home is caring for the family.

George McKinne Rider, Sr., 87, died at home on Friday, June 12, 2020. The son of Robert and Emily Rider was born May 30, 1933, in Mineola, New York. He attended public schools in Bellmore, New York, and was graduated from Mepham High School... View Obituary & Service Information

The family of Mr. George McKinne Rider created this Life Tributes page to make it easy to share your memories.