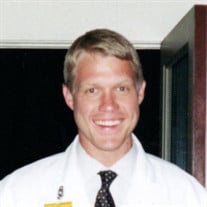 Dr. Geoffrey Stephen Connor 46, a loving husband, doting father, caring physician, and loyal brother, son, and friend bravely and fervently fought a battle with cancer that came to an end on April 28, 2021. Geoff was born on July 31, 1974, in Peoria, IL to Dr. Gregory and Barbara Marie Smith Connor. He graduated from Hartsville High School in 1992, and received his BA in Biology from Wake Forest University in 1996, and earned his M.D. from the Medical University of South Carolina in 2000. He completed his residency in orthopedic surgery at the University of Alabama-Birmingham in 2004 and a fellowship in sports medicine at Emory University the following year. He was a brilliant and skilled surgeon with a kindhearted bedside manner who practiced in both Birmingham, AL, and Charleston, SC. Geoff loved healing people and improving their lives. Although his years were short, they were very full. Geoff had a passion for live music, traveling, fast cars, fine cigars, boxing, ornithology, reading, sartorial elegance, and Italian cinema. In fact, he loved all things Italian. While at Wake Forest, he lived and studied at Casa Artom in Venice. There the seeds were planted that resulted in him becoming a true Italophile and speaking fluent Italian for the rest of his days. Geoff had a quick wit and keen sense of humor and was an incredibly talented writer. He was a remarkable man with remarkable gifts, achievements, experiences, and interests, yet the experience and role that brought him the most joy was fatherhood. He was devoted to his children and was happiest when he was near or with them. Geoff was preceded in death by grandparents, Rosemarie and Robert Shelley, Louis Smith, and Dr. Frank and Marjorie Connor. He is survived by his wife, Laura Lynn Lester; his children, Charlotte and Sam Connor; his parents, Greg and Barbara Connor; his brothers, Greg and Geremy Connor (Daphne); seven nephews and one niece: Patrick Connor, Clara Connor, Thomas Connor, Grayson Connor, Charlie Connor, Walker Connor, Beckett Connor, and Parks Marshall. The relatives and friends of Dr. and Mrs. Geoffrey S. Connor are invited to attend his Funeral Service at 2:00 PM, Monday, May 3, 2021, at Grace Church Cathedral, Charleston, SC. The family will greet friends in the church courtyard following the service. Interment will take place in Beaufort, SC at a later date. James A. McCallister Funeral home of Charleston, SC, is caring for the family. In lieu of flowers. If you wish to honor Geoff's life and legacy, Laura Lynn has asked that donations be sent to the Rucker Collier Foundation (www.ruckercollierfoundation.com) or to the Colorectal Cancer Alliance (www.ccalliance.org)

Dr. Geoffrey Stephen Connor 46, a loving husband, doting father, caring physician, and loyal brother, son, and friend bravely and fervently fought a battle with cancer that came to an end on April 28, 2021. Geoff was born on July 31, 1974, in... View Obituary & Service Information

The family of Dr. Geoffrey Stephen Connor created this Life Tributes page to make it easy to share your memories.