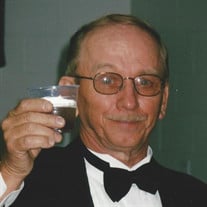 A funeral service for Mr. Günter Ekkehart Karl-Theodor Engelbert, 81, who entered into rest on Wednesday, January 20, 2021, will be held at 3 o’clock on Sunday, January 24, 2021, at Liberty Hill Baptist Church. The Rev. Jim Beck and the Rev. Jimmy Beck will officiate. The family will receive friends immediately following the service. Brown-Pennington Atkins Funeral Directors are caring for the family. Mr. Engelbert was born was born in Hockenheim Germany July 9, 1939. He was the son of Theodore Engelbert and Luise Eichhorn Engelbert. Mr. Engelbert came to the United States on December 19, 1959. Six months afterward, he joined the United States Army. He was stationed in the same barracks as his father was stationed 20 years prior in Germany. He served four years and received an honorable discharge. Afterward, he moved to California with his sister, Gisela, and her husband, Robert Travis. While living there, Günter worked various jobs on the West Coast before coming to South Carolina where he met and married his wife, Bernice Engelbert. They were married for 38 years until her death in 2006. He loved her so much and provided great care for her and their family. Günter was employed for Mafco Mfg. for 10 years, then at A.O. Smith Water Products Company for 28 years where he retired in 2008. After his retirement, he enjoyed spending time with his family, shopping at Wal-Mart and Lowe’s. He enjoyed working in his yard and had many projects going on at various times. Günter also enjoyed road trips in his Miata with the top down. It made him feel youthful to do this. Shortly after his wife’s death, he began attending Liberty Hill Baptist Church where he was baptized and became a Child of God. He enjoyed singing and playing his harmonica at church. He loved the Lord and his church along with his close friendship with the Beck family. Günter loved and provided for his family. He cared for people and was always willing to help anyone in need. He loved his sons and was always teaching and showing them how to be strong men. “PaPa” especially loved his grandchildren, Jena and Taylor. They were the apple of his eye. He and his wife spoiled both of them and never saw any wrong in them. He was blessed with a grandson, Conner Engelbert, who then stole his heart. During the summer days, “PaPa G” as Conner would call him, would sugar him up and send him home. He enjoyed spending time with Conner and teaching him how to drive the lawnmower while he sat in the trailer being towed. Conner prayed for PaPa G asking Jesus to make him better so he could come home and rotten spoil him some more. Günter also loved his dachshunds Schatzie, Hansel, and Odus. He is survived by his sons, Donnie (Candy) Engelbert of Hartsville, SC, Freddie (Danielle) Engelbert of Hartsville, SC, Teddie Engelbert of Sumter, SC, sister, Gisela Riggle of Brentwood, CA; grandchildren Jena Engelbert, Taylor Engelbert, Conner Engelbert; nieces Sheila Shoemake, Sharon Hall, all of Hartsville SC and nephew Rob(Cathy) Travis of San Luis Obispo, Ca. He was preceded in death by his wife Bernice and his brothers-in-law, Robert Travis and William Riggle, and a niece, Karin Travis. Memorials may be made to the American Heart Association, 181 East Evans Street, BTC-009, Suite 200, Florence, SC 29506, or the Darlington County Humane Society, PO Box 1655, Hartsville, SC 29550. The family would like to thank the medical staff and the nurses at McLeod Hospital in Florence, SC that worked in the PCU, ICU, and the Stroke Unit. You showed our father such great care and compassion during his time there. We are also thankful for the staff at the McLeod Hospice House for their compassion and care for our father.

A funeral service for Mr. Günter Ekkehart Karl-Theodor Engelbert, 81, who entered into rest on Wednesday, January 20, 2021, will be held at 3 o&#8217;clock on Sunday, January 24, 2021, at Liberty Hill Baptist Church. The Rev. Jim Beck and the... View Obituary & Service Information

The family of Mr. Günter Ekkehart Karl-Theodor Engelbert created this Life Tributes page to make it easy to share your memories.