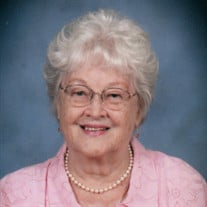 Mrs. Dorothy Geer Larsek, 94, entered into rest on Sunday, March 21, 2021. Born in Westminster, VT, on March 18, 1927, she was a daughter of the late Charles Wesson Geer and the late Agnes Wright Geer. Dorothy was a member of St. Bridget of Kildare Catholic Church in Moodus, CT. She was Head Cook at Nathan Hale Ray High School for twenty-two years before retiring to Florida where she lived for eighteen years. In 2006, she moved to Hartsville, SC with her family. Dorothy was a loving wife, mother, grandmother, and great-grandmother. She cherished her family and always put others first. In Connecticut, she made many wedding cakes and loved attending her grandchildren's baseball game to cheer them on. In Florida, she would always attend the grandchildren's hockey games and would bake cookies for the teams. She would also yell at the refs when necessary! Her hobbies were baking, cooking, crocheting, playing cards, and putting together puzzles. Through the years she crocheted over five hundred baby blankets and gave them away to whoever needed them. Many were given to the Baby Center at Carolina Pines Regional Medical Center in Hartsville. She lived with her youngest daughter, Theresa, for fifteen years and they cherished every day they were together. Dorothy was very fortunate to live those fifteen years with her other two daughters as neighbors on the same street. She will be greatly missed. Surviving are her daughters, Christine Fusco, Mary Lou Staba, Theresa Heyman, all of Hartsville, SC, and Joanne Daniels (John) of Moodus, CT; sister, Shirley Gilbert of Taftville, CT; grandchildren, Erin Rowland of Wilbraham, MA; Shaun Rowland (Jennifer) of Nashua, NH, Edward F. Staba (Ashley) of Carbondale, IL, Jason L. Staba (Rachel) of Greenville, NC; granddaughter-in-law, Jennifer Rowland of Florence, SC; seven great-grandchildren; three great-great-grandchildren. In addition to her parents, she was preceded in death by her husband, Frank Henry Larsek; grandson, Mark Rowland; sons-in-law, James Fusco and Edward Staba; brothers, Charles Geer and George Geer. Memorials may be made in her honor to the Darlington County Humane Society, PO Box 1655, Hartsville, SC or online at https://darlingtonhumane.org/donate/ Brown-Pennington-Atkins Funeral Directors are caring for the family.

Mrs. Dorothy Geer Larsek, 94, entered into rest on Sunday, March 21, 2021. Born in Westminster, VT, on March 18, 1927, she was a daughter of the late Charles Wesson Geer and the late Agnes Wright Geer. Dorothy was a member of St. Bridget of... View Obituary & Service Information

The family of Mrs. Dorothy Geer Larsek created this Life Tributes page to make it easy to share your memories.