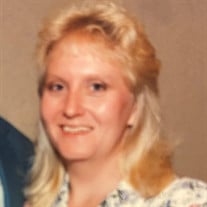 Funeral services for Mrs. Donna Faith Nolan Keith, 55, will be held at 4:00 pm on Monday, November 23, 2020 at the Welsh Neck Baptist Church. The Rev. Darryl Davis will officiate. The family will receive friends following the service and also at their home Mrs. Keith entered into rest on Friday, November 20, 2020. Born Donna Faith Nolan, to her parents, Melvin Nolan and Brenda Frazier Nolan. She was the oldest of three girls and later she was blessed with a younger sister, Ellie Nolan Ivey (Dennis). The second daughter passed away at the age of 43. Then came Michelle Huneycutt. She was predeceased by a sister, Kimberly Carol Nolan and a niece like a daughter, Melanie Carol Huneycutt. Donna worked at Klopman Mills for a number of years. This is where she met her soul mate and future husband, Rodney Keith. After a whirlwind courtship, Donna and Rodney were married on May 5th, 1993. On June 6, 1998. Donna and Rodney became parents to a boy, Nolan. She returned from work to stay home with her son. For more than 27 years the three of them were devoted to each other and dependent on each other. Donna had a loving devoted and giving tender spirit. She was hurt easily, but when she warmed up to someone, she had a great sense of humor. Her health had not been good for a while. She had gone through hip replacements, knee problems, and eye problems after a brain aneurysm and surgery to repair that. She loved her pets, beginning with a border husky she named “Sunshine”. Sunshine ultimately found a spot somewhere nearby Donna if Donna was sitting or outside. She loved her home and had great respect for her neighbors and neighborhood. She was trying to get healthy again, but the challenge sometimes became too much, and she would try again. Donna was very consistent in two things, her love and devotion to Rodney and her love for Nolan. She was looking forward to more time with her niece, Melanie Honeycutt. She also loved her irreplaceable Jonathan and Branden Ivey. It is not only hard to say goodbye but impossible in some cases. According to the scripture, we don’t have to we can see our loved ones again when God tells us our trials are over also. They are waiting for us, ready to “catch up” where we left off, only believe and confess-trust in His word and He will do the rest. Memorials may be made to the Darlington County Humane Society, Box 1655, Hartsville, SC 29551

Funeral services for Mrs. Donna Faith Nolan Keith, 55, will be held at 4:00 pm on Monday, November 23, 2020 at the Welsh Neck Baptist Church. The Rev. Darryl Davis will officiate. The family will receive friends following the service and also... View Obituary & Service Information

The family of Mrs. Donna Faith Nolan Keith created this Life Tributes page to make it easy to share your memories.

Funeral services for Mrs. Donna Faith Nolan Keith, 55, will be...