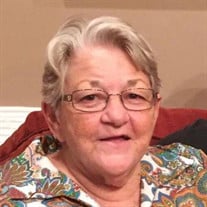 A graveside funeral service for Mrs. Diane King Winburn, 74, will be held at 12:00 pm on Monday, January 25, 2021, in the Union United Methodist Church Cemetery. The Rev. Paige Wheeler and The Rev. Charlie Short will officiate. The family will receive friends immediately following the service, and also from 3:00 until 6:00 pm on Sunday, January 24, 2021, at the home of Bert and Marcia Winburn, 4181 Rodanthe Circle, Florence, SC. Brown-Pennington-Atkins Funeral Directors are caring for the family. In lieu of flowers, memorials may be made to the American Stroke Association or St.Judes’ Children’s Hospital. Mrs. Winburn entered into rest on Friday, January 22, 2021. Diane was born in Hartsville on June 28, 1946. She was the Daughter of Brock and Lurie McDonald King. Diane grew up and lived in Hartsville her entire life. She was a 1964 graduate of Hartsville High School and was a proud lifetime Red Fox. She had a brief career in cosmetology and later worked 20+ years in several positions with the Darlington County School District. She was a volunteer and selfless fundraiser for the Hartsville Northern League Dixie Youth Baseball, and a member of Union United Methodist Church. Diane was affectionately known as Mema to her grandchildren, their friends, and many others. She made an extra effort to speak to everyone she knew, and many she thought she knew. She was always happy to hear from family and friends and curious to know what was going on in their lives. Most of all she loved her family unconditionally and was there supporting them no matter the circumstances. She is survived by her husband of 53 years, Arlon “Mac” Winburn; son, Bert (Marcia) Winburn; grandchildren, Andrew Winburn, Bryce Winburn, McKenna O’Neal, and Ryder O’Neal; brothers-in-law, Smitty Soles, Harold W. Winburn, and Howard J. Winburn; nephews, cousins, and friends whom she loved dearly. She was preceded in death by her sister, Katherine Soles, and her beloved niece, Sobie Soles Dixon.

A graveside funeral service for Mrs. Diane King Winburn, 74, will be held at 12:00 pm on Monday, January 25, 2021, in the Union United Methodist Church Cemetery. The Rev. Paige Wheeler and The Rev. Charlie Short will officiate. The family will... View Obituary & Service Information

The family of Mrs. Diane King Winburn created this Life Tributes page to make it easy to share your memories.