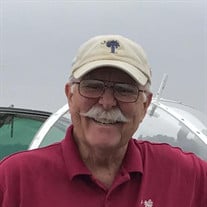 Funeral services for Mr. David Laurence "Dave" Bailey, 84, who entered into rest on Tuesday, November 3, 2020, will be held at 11 o'clock on Saturday, November 7, 2020, at St. Bartholomew's Church. The Rev. William D. "Bill" Oldland will officiate, and the family will receive friends following the service. The entombment will be private. Brown-Pennington-Atkins Funeral Directors are caring for the family. In lieu of flowers, memorials may be made in his honor to St. Bartholomew's Church, 103 Campus Drive, Hartsville, SC 29550. Born in Windsor, Ontario, Canada, he was the son of the late Mary Smith Bailey and Jack Bailey. Dave and his family moved to Hartsville from Canada due to a job transfer with Anderson Brass Company, where he was the personnel manager. He and his wife later moved to Freeport, New Hampshire. They ultimately returned to Hartsville, where he held the positions of Economic Development Director for both Darlington County and Dillon County. After his retirement, Dave loved to fly his airplane around Hartsville, hunt, and enjoy fellowship with his friends. He was also known to take a spontaneous road trip. He was a long time member of St. Bartholomew’s Episcopal Church, the Hartsville Outdoor Club, and the Pee Dee Sailing Society of Hartsville. Whether he was attending a chorus recital, school play, or softball game, his pride in and love for his grandchildren was very evident. Dave was a great friend, father, father-in-law, and papa and will be greatly missed. Dave was preceded in death by his loving wife, Mary Lou; his brothers Bill Bailey and Jack Bailey; and his son, Michael Bailey. Surviving are his son and daughter-in-law, Greg (Paula) Bailey of Hartsville, SC; two grandchildren, Anna Bailey and Allie Bailey; several nieces, nephews, and cousins.

The family of Mr. David Laurence "Dave" Bailey created this Life Tributes page to make it easy to share your memories.