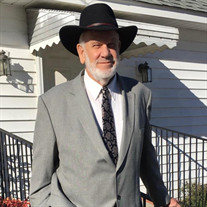 A graveside funeral service for Mr. Davis Asbury White, 79, who entered into rest on Saturday, April 10, 2021, will be held at 11 o'clock on Tuesday, April 13, 2021, in Bethlehem United Methodist Church Cemetery, Bishopville, SC. The Rev. Herb Kelso will officiate and The Rev. Lin Kirkman will offer a musical selection. The family will receive friends from 5:00 until 7:00 PM on Monday, April 12, 2021, at Hancock-Elmore-Hill Funeral Home. Born in Camden, SC, he was a son of the late Marion Napier White and the late Lila Lee Davis White. He was known as "D. A." by his friends and associates until he became known as Judge White. Mr. White was involved in farming and later was the chief magistrate of Lee County for over 28 years. He was a Tour Bus Driver for many years and would always bring a silver spoon back to his children from each state he visited. He enjoyed riding on the pontoon at Santee with his dogs and family and enjoyed taking his grandchildren fishing on the pier. He enjoyed hunting, fishing, shrimping, and gathering oysters. His family was always important and he especially enjoyed spending time with them at family gatherings. He was a respected Shriner and had a very warm and reaching personality. Surviving are his wife, Rita Simmons White; children, Davis A. White, Jr., Melanie Beth "Betsy" White Brown, Marion Kay White, Lee A. White Mitchell; step-children, Thomas M. Simmons, Jr., Jesselyn Lane Simmons; grandchildren, Sarah Elizabeth White, Alex White, Dex Barrett, Britt Barrett, Gill Brown, Maddison Baxley, Emma Mitchell, Stuart Mitchell; sister, Fannie White Watson. In addition to his parents, he was preceded in death by his sister, Marion Napier White. Memorials may be made to the American Cancer Society (www.cancer.org/involved/donate) or to the American Diabetes Foundation (www.diabetes.org/donate/donate-memorial)

The family of Mr. D. A. White created this Life Tributes page to make it easy to share your memories.

A graveside funeral service for Mr. Davis Asbury White, 79, who...