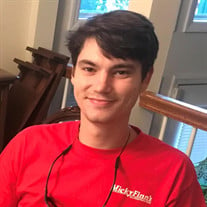 A graveside service for Cole Thomas Hudson, 23, who passed away on Tuesday, June 16, 2020, will be held at 11:00 a.m. on Saturday, June 20, 2020 in Westview Memorial Park Cemetery. Friends may come by Brown-Pennington-Atkins Funeral Home on Friday between 3:30 p.m. and 5:30 p.m. for a time of viewing. Cole was born in Huntsville, AL, and moved to Hartsville after 1st grade. He was the son of Charlie "Chuck" E. Hudson, Jr., and Susan T. Hudson. He is survived by his parents and his sister, Abby Hudson. He was predeceased by his grandparents; Bill and Iris Thomas of Bishopville, SC, and Charlie and Alice Hudson also of Bishopville. He was employed as a Machinist at Ingersoll Rand’s Trane Technologies in Charlotte, NC. Cole thrived being outdoors, whether he was golfing or taking a hike in the mountains. Hunting and fishing were his passions. He also loved anything on the water—boating, water skiing, wakeboarding, “surfing” on a kneeboard. He had no fear when it came to any type of water sport. Cole loved deeply and his emotions were strong. He was a loving son, brother, family member, and friend. He also had a passion for all animals but, above all, dogs. He was no musician, as evidenced by his attempts at banjo and harmonica, but he greatly enjoyed listening to a variety of music. Cole battled his entire life and overcame so much to become a fine young man, but he ultimately lost his battle with depression. If only he could have seen himself through the eyes of those around him. In lieu of flowers, contributions may be made to the Mental Health organization of one’s choice or the Humane Society. Brown-Pennington-Atkins Funeral Home is caring for the family.

A graveside service for Cole Thomas Hudson, 23, who passed away on Tuesday, June 16, 2020, will be held at 11:00 a.m. on Saturday, June 20, 2020 in Westview Memorial Park Cemetery. Friends may come by Brown-Pennington-Atkins Funeral Home on... View Obituary & Service Information

The family of Mr. Cole Thomas Hudson created this Life Tributes page to make it easy to share your memories.

A graveside service for Cole Thomas Hudson, 23, who passed away...